SI.com: What does Barack Obama’s golf swing tell us? 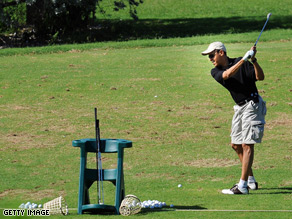 Golf.com has performed an important service. It has posted five photographs, taken by AP photographer Gerald Herbert, that shows President-elect Barack Obama on vacation in Hawaii playing golf. This is invaluable as we all know that nothing, not even a CNN special called "Obama Revealed," reveals the soul as ruthlessly and efficiently as how one plays the old Scottish game.

John F. Kennedy nearly made a hole-in-one on the short par-3 15th at Cypress Point (the best-smelling hole in all of golf, if you like the mix of eucalyptus and brackish ocean water) while running for the presidency in 1960. Kennedy, considered by presidential golfing historians to be by far the most skilled of our golf-playing presidents, was relieved to see the ball stay out. He was trying to succeed Dwight Eisenhower as president, and not as First Golfer. The game then wasn't the populist activity it has become. Kennedy, foolishly, allowed himself to be photographed taking a golf swing in fancy loafers, no socks. Still, he won West Virginia.

But Obama does not have to run from his golf. The guess here is that he's an athlete and a duffer and fun to play with.