Obama family to move to DC this weekend, say aides 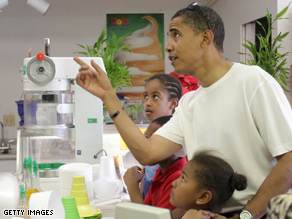 The Obamas are moving early in part so daughters Malia and Sasha, above, can start school on time.

(CNN) - The Obama family is planning to move to Washington this weekend, say two transition officials. “They will stay at a Washington hotel through the 15th and then they will move into the Blair House,” said the first official.

President-elect Barack Obama and wife Michelle are coming to DC early in part to be there for the beginning of school for daughters Malia and Sasha, but will not specify which day that will be.