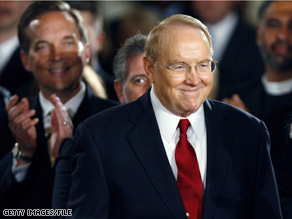 Focus on the Family announced Friday that James Dobson has stepped down from his position as chairman of the group's board.

(CNN) - James Dobson, evangelical leader of the Christian ministry Focus on the Family, has stepped down as board chairman, he announced Friday.