Laura Bush: I understand why Cheney's speaking out 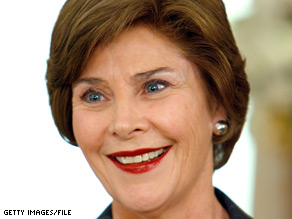 Former first lady Laura Bush said she knew why Cheney is speaking out - and why her husband isn't.

But she explained why her husband, former President George Bush, has not given any public interviews or commented critically on the new administration since leaving office in January.

"I think that's [Cheney's] right as a citizen of the U.S., and I think he also feels obligated, and so I understand why he wants to speak out," Laura Bush said in an interview on ABC's Good Morning America broadcast Monday. "On the other hand, George feels like as a former president that he owes President Obama his silence on issues, and that there's no reason to second guess any decisions that he makes."

President Bush has given few public addresses, and no one-on-one interviews, since Obama's inauguration.

Bush sounded a positive note over at least one of Obama's decisions: his pick of Judge Sonia Sotomayor to serve on the Supreme Court, calling her "a very interesting and good nominee."

"As a woman, I'm proud that there might be another woman on the court," she said. "So we'll see what happens, but I wish her well."

The former first lady said that she and her husband have discussed the civil war over the Republican Party's future, but downplayed the intra-party conflict.

"It's like creative tension within a party for people to talk about... how they want to be represented," she said.