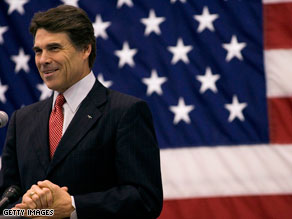 Washington (CNN) - Sarah Palin caused a stir this week when she demanded that President Obama fire his Chief of Staff Rahm Emanuel for using the word "retarded" to describe Democrats opposed to the administration's health care plans.

Now that Palin is headed to Texas to campaign for Gov. Rick Perry in his re-election bid, the campaign manager for Perry's rival Kay Bailey Hutchison is alleging that a top Perry aide used the very same term during a recent conference call.

According to Sullivan, Carney became "bombastic and agitated" when he learned that one of the candidate holding rooms would be in a separate building from the debate venue. (Perry's team eventually got the holding room they wanted.)

"That's just retarded," Carney said when he learned about the holding room location, according to Sullivan. "That's the most retarded thing I've ever heard."

Sullivan said Carney used the word once again minutes later as the camps discussed how the debate footage would be used after the forum.

A spokesman for Perry did not respond to a request for comment on the call, nor did an aide to Palin, who is heading to Texas on Sunday to appear with the governor.

The executive producer of the debate, Rick Thompson of public television station KERA, would not comment on the conference call, telling CNN that "all pre-debate discussions and negotiations are confidential."

Sullivan said he was not under the impression that the call was confidential.

Palin, whose youngest son Trig has Down Syndrome, wrote on her Facebook page Monday that the word "retarded" is "a slur on all God's children with cognitive and developmental disabilities." She said Emanuel's use of the term, first reported in a Wall Street Journal article, was "unacceptable" and "heartbreaking."