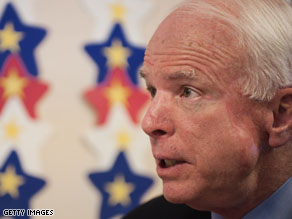 That is the title of the television and radio spots that the McCain campaign released statewide on Thursday. Sen. McCain is locked in a battle with the former congressman to win the GOP senate nomination in Arizona.

Both the radio and television ads cite Hayworth being "described as an 'avid earmarker.'" In a corresponding e-mail to reporters, the McCain campaign listed media reports to bolster their claim.

In the TV ad, McCain is cast as a staunch opponent "against pork barrel spending." "He fights to save us money," an announcer also says.

Then, over video of Hayworth, on-screen graphics list items that the ad says Hayworth supported while he was in Congress, including: "$220,000 to renovate Maine Blueberry farm," "$250,000 to control Maui seaweed," "$5.8 million for Vermont snowmobile trail," "$300,000 to map the genes of Michigan chickens" and "$223 million for 'Bridge to Nowhere'."

A woman at the end of the television ad says, "I just don't think we can afford J.D. Hayworth right now."

The radio ad lists three of the same items seen in the TV spot, with both spots tagging with a similar theme.

In a statement, McCain 2010 Communications Director Brian Rogers said that McCain "has never requested a pork barrel earmark," and accused Hayworth of "exploiting the corrupt and wasteful practice of earmarking and voting for billions of dollars in wasteful pork barrel spending."

Hayworth's campaign is responding to the fresh political attacks. Spokesman Mark Sanders told CNN, "The kind lady at the end of the [television] ad has it wrong. She can't afford not to have J.D. Hayworth in the Senate. Between the Wall Street bailouts and the outrageous $2.6 trillion plan for retirement benefits for illegal aliens, she really cant afford six more years of John McCain."

Regarding the listing of items that Hayworth supported while in Congress, Sanders said, "Voters are on to this old Washington trick of cherry picking measures in massive appropriation bills and using them in attack ads. John McCain has gone negative. He must be worried."