Obama, Hayward didn't talk one on one 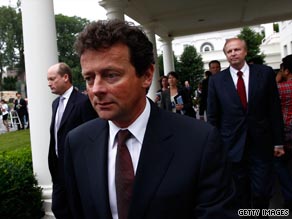 BP CEO Tony Hayward did not have any direct one-on-one contact with President Obama during Wednesday’s White House meeting.

In defending that decision, the official said there was nothing the president needed to say to Hayward that he didn't say to the entire group.

Obama met for 20 minutes with the group of BP executives, then individually in the Oval Office for another 25 minutes with Chairman Carl-Henric Svanberg.

Asked if the president used strong language to scold the executives, the official insisted that the tone was "businesslike."

The official, who was present for part of the meeting, suggested the real arm twisting took place in the days leading up to the meeting and that while there were still sticking points, BP executives showed up aware of what they needed to do.