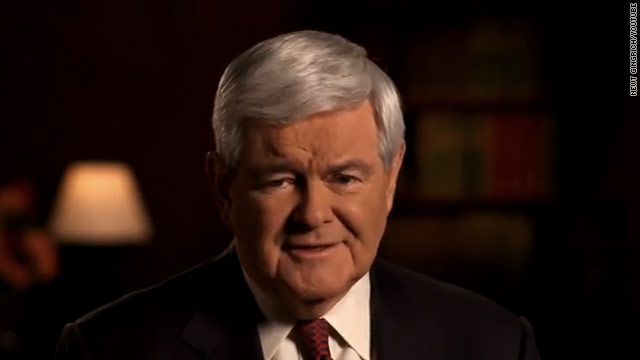 (CNN) - Hours before the final GOP debate prior to the Jan. 3 Iowa caucuses, Newt Gingrich is going up with the second TV ad of his Republican presidential campaign in the Hawkeye state.

In the 30-second spot, the former House speaker stays positive in message and takes on rival candidates who have attacked him on the campaign trail.

"These are challenging and important times for America. We want and deserve solutions. Others seem to be more focused on attacks rather than moving the country forward. That's up to them," says Gingrich, talking into the camera in the commercial.

"I believe bold ideas and new solutions will unleash America's creative spirit. When I was speaker, our budget was balanced and 11 million jobs were created. We can do it again and rebuild the America we love."

While rivals such as former Massachusetts Gov. Mitt Romney, Rep. Ron Paul of Texas, Rep. Michele Bachmann of Minnesota, and former Sen. Rick Santorum of Pennsylvania have criticized Gingrich recently, the newest front-runner in the polls in the race for the GOP nomination says he will stay positive, and has directed his staff and surrogates not to launch attacks on fellow Republican White House hopefuls.

Asked by CNN Political Correspondent Jim Acosta on the campaign trail in Iowa Wednesday if he would respond to such attacks, Gingrich said "I understand what their consultants are doing. That's fine. They should run their campaign the way they want to and I'm going to run the campaign I want to."

Gingrich's first TV ad, which went up on Iowa TV early last week, was also positive in nature, with the candidate calling for shrinking government and reducing regulations. He added that "some people say the America we know and love is a thing of the past. I don't believe that. Because working together, I know we can rebuild America."

Word of the second Gingrich TV commercial was first reported by Politico.