Washington (CNN) – In a wide-ranging interview with CNN, Defense Secretary Robert Gates said the relationship between the U.S. and Pakistan is much improved. And Gates said, in his opinion, the international community needs to move swiftly to pass a United Nations resolution backing sanctions on Iran.

The Pakistanis "are very sensitive to the size of the American footprint, the number of Americans on the ground in a training capacity or whatever," Gates said in an interview that aired on CNN's John King, USA. "They're also extremely sensitive about their sovereignty. And we have to respect those things.

"So I think those are things that we're working our way through, but frankly, as I've just indicated, I think the relationship has been improving significantly, and I expect that to continue," Gates said.

"I would just say we are doing what we need to do," the Defense secretary told King.

On Iran, Gates said the international community should not be fooled by the relative calm that has followed Tehran's efforts to crack down on protests after last year's disputed presidential election results.
END_OF_DOCUMENT_TOKEN_TO_BE_REPLACED

Washington (CNN) - Lawmakers questioned a high-ranking diplomat and a top military official to Afghanistan on Thursday about the U.S. strategy in Afghanistan in light of a troop surge announced last week.

Legislators on the House Committee on Foreign Affairs inquired how Pakistan played a role in the Afghanistan strategy; the impact of community development in combating the insurgency and measuring progress; and on the practicality of the July 2011 timeline for withdrawing U.S. troops, among other issues.

The hearing was the fourth this week in which top officials testified about President Barack Obama's new plan for the Afghan war, which involves the deployment of another 30,000 U.S. troops and a July 2011 date for the beginning of an American withdrawal.

It was the third hearing for Gen. Stanley McChrystal, the top U.S. commander in Afghanistan, and the fourth for U.S. Ambassador Karl Eikenberry.

Jones on getting Bin Laden: 'We're going to have to get after that'

Click to watch video
Washington (CNN) – A top national security adviser to President Obama said Sunday that the administration needs to step up its efforts to capture Osama bin Laden, the alleged mastermind of the September 11, 2001 terrorist attacks on the U.S. and the leader of the global terrorism network called al Qaeda.

“And, we’re going to have to get after that to make sure that this very, very important symbol of what al Qaeda stands for is either once again on the run or captured or killed.”

“By, ‘we’re going to have to get after that,’ you mean a more determined, a more focused – some new effort to get him?,” queried CNN Chief National Correspondent John King.
END_OF_DOCUMENT_TOKEN_TO_BE_REPLACED 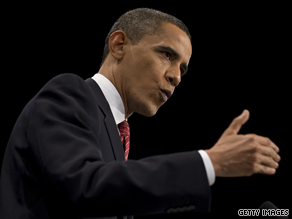 Success in Afghanistan is 'inextricably linked to our partnership with Pakistan,' President Obama said Tuesday night.

Washington (CNN) - When President Obama took to the world stage to detail U.S. policy toward Afghanistan, he hammered home a key foreign policy principle: Success in Afghanistan is "inextricably linked to our partnership with Pakistan."

"We are in Afghanistan to prevent a cancer from once again spreading through that country," he said in his Tuesday night speech at West Point. "But this same cancer has also taken root in the border region of Pakistan. That is why we need a strategy that works on both sides of the border."

The United States says Pakistan looms large because Taliban and al Qaeda militants operating in Afghanistan also have had a presence in Pakistan's northwestern region near the Afghan border and have threatened the governments and troops in both countries.

One U.S. counterterrorism official told CNN the Afghan Taliban has bolstered its ranks, stepped up its attacks and increased its territory. In Pakistan, al Qaeda and other militants persist in planning strikes against U.S. interests in the region, the official said.

Crowley: What happens if border is not secure?

(CNN) – Big question on "deadline." What happens if the border on the Pakistani side is not under control in 18 months? Does the U.S. still begin to leave Afghanistan? 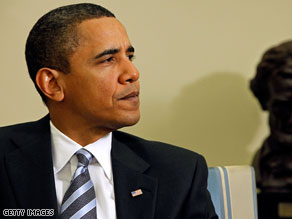 WASHINGTON (CNN) - President Barack Obama huddled with the Joint Chiefs of Staff and other top military advisers at the White House on Friday as the administration continued its sweeping review of U.S. strategy in Afghanistan.

Each branch of the armed services was given a direct opportunity to tell Obama the effect on the military if a large number of additional forces are sent to Afghanistan, two military sources told CNN's Barbara Starr.

The meeting was the seventh in a series of high-level discussions being held in part to forge a new consensus on how best to confront Taliban and al Qaeda militants threatening the governments of Afghanistan and Pakistan.

"The president wants to get input from different services," White House spokesman Tommy Vietor said earlier this week. "It's a chance to consult with uniformed military leadership as a part of his [Afghanistan-Pakistan] review."

END_OF_DOCUMENT_TOKEN_TO_BE_REPLACED

Clinton questions why Pakistan has not destroyed al Qaeda

ISLAMABAD, Pakistan (CNN) - Secretary of State Hillary Clinton on Thursday questioned why Pakistani officials have not been able to capture or kill members of al Qaeda taking refuge in the country.

"Al Qaeda has had safe haven in Pakistan since 2002," she told a group of Pakistani journalists during her trip to the country.

"I find it hard to believe that nobody in your government knows where they are and couldn't get them if they really wanted to ... Maybe that's the case," she added. "Maybe they're not gettable. I don't know."

Al Qaeda, she said, has launched attacks on Indonesia, the Philippines and many other countries, "so the world has an interest in seeing the capture and killing of the people who are the masterminds of this terrorist syndicate."

"As far as we know, they are in Pakistan."
END_OF_DOCUMENT_TOKEN_TO_BE_REPLACED

Clinton has tough sell in repairing relationship with Pakistan 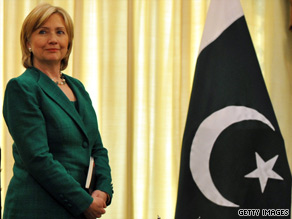 Secretary of State Clinton, pictured here with the Pakistani flag, is overseas meeting with Pakistani officials.

Islamabad, Pakistan (CNN) - Just a few hours after Secretary of State Hillary Clinton arrived in Islamabad, a massive car bomb exploded in a crowded market frequented by women in the northwest city of Peshawar, a two-hour drive away.

The city lies near Pakistan's tribal areas where al Qaeda and other extremist groups are believed to be hiding.

Condemning what she called "vicious attacks," Clinton called those who carry them out "cowards."

"They are not courageous, they are cowardly," she told reporters, speaking slowly and deliberately. "If the people behind these attacks were so sure of their beliefs, let them join the political process. Let them come forth to the people of Pakistan in this democracy and make their case that they don't want girls to go to school. That they want women to be kept back."

This comes as Obama and his advisers have held meetings in recent weeks to discuss U.S. strategy in Afghanistan and Pakistan, where Taliban and al Qaeda militants threaten the governments of both countries.

American officials continue to weigh a reported call from Gen. Stanley McChrystal, the top U.S. commander in Afghanistan, for as many as 40,000 additional troops for the fight against the Taliban in Afghanistan.

The meeting - closed to the press - is expected to include Vice President Joe Biden via videoconference, Secretary of State Hillary Clinton and Secretary of Defense Robert Gates. 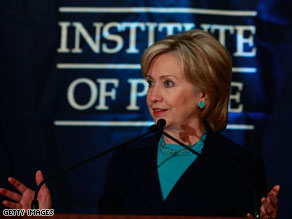 "So I am not going to talk about timing, details or who she [Clinton] is going to see.," Holbrooke said at a special briefing at the State Department. "Except to say she will see the leadership of the country, the leading members of the opposition, civic society, businessmen and as many people as she can in a limited period of time, with the limits of a very, very dramatic situation going on."

Clinton's visit comes as Pakistan is fighting a major military offensive against the Taliban - and reeling from a wave of terror attacks that have caused hundreds of deaths. The country also faces new tensions with the U.S.

Holbrooke, as other U.S. officials have done in recent weeks, again said that billions of dollars in U.S. aid to Pakistan places no conditions on the government or the military there. Pakistan politicians have accused the U.S. of meddling and micro managing.