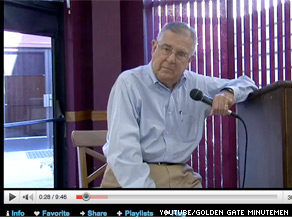 California Democrat Pete Stark had a spirited discussion at a recent town hall.

(CNN) - Rep. Pete Stark must like going viral, at least amongst his conservative detractors.

"Who are you going to kill today?" is how he solicited a question from a self-proclaimed Minuteman - the volunteer organization, which tries to prevent illegal crossings of the U.S. border - at a recent town hall meeting in Fremont, California. It went from there.

The questioner continued, seen on a video posted by The Golden Gate Minuteman on Youtube, questioning the California Democrat over what the government will do to "to seal our borders so that we're a solvent country again."

Stark's answer: "We can't get enough Minuteman armed. We'd like to get all the Minuteman armed so they could stop shooting the people here," Stark said.

END_OF_DOCUMENT_TOKEN_TO_BE_REPLACED 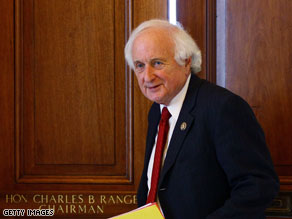 Levin replaces Rep. Charlie Rangel, D-New York, who temporarily stepped aside Wednesday until the conclusion of an ongoing ethics investigation.

“The honorable the Speaker, House of Representatives, Madam, I hereby resign as acting chairman of the Committee on Ways and Means," read a letter written by Stark.

The Ways and Means Committee is responsible for crafting tax legislation.