Obama: I am ready for the picket line

ATLANTA (CNN) - Senator Barack Obama has his suntan lotion and Panama hat in hand to walk the picket line with Las Vegas union casino workers if they cannot reach a contract settlement.

"I'm prepared. I'm equipped. I'm ready to walk with you. I’m ready to march with you” said Obama to members of the Culinary Workers Union Friday in Las Vegas, Nevada.

Obama stressed that when unions are stronger, workers get a larger share of the economy.

"All we're asking for is make sure the burdens and benefits of this new global economy are spread evenly across the board," he said. "That if profits are going up for everybody, then those profits are shared with workers. If CEO's have free healthcare, then workers get free healthcare."

Obama left the Culinary Workers Union with a standing ovation and headed to a rally at a Las Vegas high school.

WASHINGTON (CNN) - The Republican National Committee is slamming the top three Democratic presidential candidates for their position on the Iraq war spending bill, in a radio ad set to air in the New Hampshire media market this weekend.

It features New Hampshire State Rep. Al Baldasaro, a veteran of the Gulf war, claiming Sens. Hillary Clinton and Barack Obama, along with former Sen. John Edwards, have done an "about face" by not supporting the latest Senate bill that funds the Iraq war.

"A few weeks ago Barack Obama said he didn't want to play chicken with the troops and create a situation where they wouldn't have the equipment they need," Baldasaro says in the ad. "Last month Hillary Clinton said "of course" she would fund our troops. And John Edwards said in mid-may, "it's time to support our troops."

Clinton and Obama faced significant pressure from within their party to vote against the war spending bill last week because it did not include a timetable for withdrawal from Iraq.

"Is politics more important than our troops in harm's way?" Baldasaro asks in the ad.

MANCHESTER, New Hampshire (CNN) - The presidential candidates will literally be on thin ice during this weekend’s presidential debates.

The CNN WMUR-TV and The New Hampshire Union Leader sponsored debates are being held inside the hockey arena at Saint Anselm College just outside of Manchester. The stage is built on top of the rink and right over the ice. In fact, the Zamboni machine is just yards away from the candidates’ podiums, right behind the seating for the audience. Zamboni machines, for those not in the know, are used to smooth out the surface at ice rinks.

Production crews are putting the finishing touches on the stage, just two days before debates kick off. The Democrats lead off Sunday at 7 p.m. ET and the Republicans face off at the same time Tuesday.

The events will be watch around the world, and the world’s media will be here. More than 600 journalists from the U.S. and across the globe are gearing up to cover the debates. 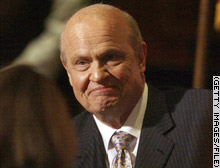 WASHINGTON (CNN) - Former Tennessee Sen. Fred Thompson has created a fundraising committee that will allow him to begin raising money for a possible presidential campaign, according to Tennessee officials.

Thompson filed papers Friday with the Tennessee Secretary of State creating “Friends of Fred Thompson,” a state-based corporation that will raise and spend money to gauge interest and support for a possible Thompson White House bid.

Under federal law, prospective candidates are allowed to raise and spend money to “test the waters” for a bid for federal office without having to create a federal campaign committee. However, once a candidate declares his or her candidacy, the candidate must then go back and report any money raised and spent during the “testing the waters” phase. These organizations have been called both “exploratory” and “testing the waters” committees.

The advantage to Thompson in creating a state committee is that it allows him to begin raising money for a possible presidential campaign, but exempts him from having to file a detailed campaign finance report for this quarter. All declared candidates with federal committees must report any money they’ve raised and spent through June 30 in reports due to the FEC on July 15. Assuming Thompson does not create a federal campaign committee until after June 30, any money raised and spent before then would not need to be reported until mid-October.

Thompson is not the first 2008 presidential candidate to first create a state-based exploratory committee before establishing a federal committee. Both GOP hopefuls Rudy Giuliani and Ron Paul did so in their respective home states of New York and Texas before creating their federal campaign committees. 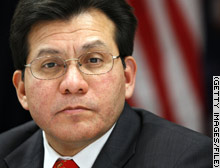 Gonzales vowed Friday to stay at his post until the end of Bush's term.

WASHINGTON (CNN) - Beleaguered Attorney General Alberto Gonzales vowed Friday to remain in his post through the end of President Bush's second term, in a "sprint to the finish line."

In his most definitive statement on the issue to date, Gonzales made clear to his critics during a speech on crime that he would continue to reject their calls for his resignation.

"I know that I only have 18 months left in my term as attorney general, and that really does not feel like a lot of time to accomplish all of the goals that are important to me. So often Washington seems to run at a marathon pace, but I intend to spend the next year and a half in a sprint to the finish line," Gonzales said.

The attorney general volunteered the comments near the end of a speech announcing anti-crime initiatives at the headquarters of the Bureau of Alcohol, Tobacco and Firearms in Washington. ATF employees, whose agency is part of the Justice Department, gave their boss a strong round of applause when he was introduced and when he completed his speech.

News reporters were carefully kept away from the attorney general so he could not be questioned.

WASHINGTON (CNN) - President Bush on Friday condemned the detention of four Iranian-Americans in Tehran, and called for their release - "immediately and unconditionally."

"Several of our fellow American citizens - including Haleh Esfandiari, Parnaz Azima, Kian Tajbakhsh and Ali Shakeri - are being held against their will by the Iranian regime," Bush said in a statement released by the White House. "I strongly condemn their detention at the hands of Iranian authorities. They should be freed immediately and unconditionally."

Earlier this week, Iran formally charged Esfandiari with trying to topple the government, according to an Iranian judiciary official, who also said that Tajbakhsh, a sociologist, is being detained in Tehran.

Esfandiari, 67, who works for the Woodrow Wilson Center for Scholars in Washington, was jailed in Tehran on May 8 and Tajbakhsh, an independent consultant and urban planner employed by U.S. philanthropists George Soros' Open Society Institute, was picked up two days later.

New Hampshire politicking not what it used to be 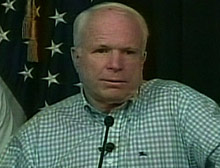 McCain visited Iraq in April on a publicly funded trip.

WASHINGTON (CNN) - In the course of election campaigns, the incumbent administration usually begins to offer the top contenders both national security and military briefings, as a matter of course and to avoid misspeaking about defense matters.

But the high number of candidates and continuing war is making this a tricky situation for the Pentagon.

The Defense Department is starting to field requests for travel to Iraq - a good photo-op for candidates.

Sources tell CNN that former New York City Mayor Rudy Giuliani is trying to get to Iraq, but there are still questions about how he would travel there, who would provide security and who would pay.

Of course, many of the candidates are congressional members and can go to Iraq on a publicly funded trip. Recently we've seen a few such trips including Sen. John McCain, R-Arizona, who traveled to the country last April.

Congressional members also get Iraq briefings as part of their day jobs on the Hill.

Now the Pentagon has to figure out when to start briefing candidates who are not office-holders like Giuliani and former Sen. John Edwards.

The White House, Pentagon and intelligence agencies are beginning to discuss when and how to do just that, but the talks are very preliminary at the moment, sources say.

Race to '08: Demise of retail politics

CNN Senior Political Correspondent Candy Crowley and CNN's John Lisk look at the demise of "retail politics" in New Hampshire, in the latest "Race to '08" podcast.

WASHINGTON (CNN) - President Bush released the following statement Friday on the resignation of one of his top advisers, Dan Bartlett:

"Laura and I will miss Dan Bartlett very much. Dan has been a true counselor to the President. His contribution has been immeasurable. I value his judgment and I treasure his friendship. Since coming to work for me fourteen years ago as I prepared to run for Governor, Dan has become a husband and a father. I understand his decision to make his young family his first priority. His most important job is to be a loving husband and father of three young sons. We wish him all the best."