Paris Hilton appeared in court Friday in Los Angeles. The judge ordered her to return to jail after serving only three days behind bars.

ATLANTA, Georgia (CNN)—The ongoing legal saga that surrounds Paris Hilton even found its way into the political realm Friday. New Mexico Governor, and 2008 Democratic presidential candidate, Bill Richardson, wrote a letter to the judge commending him for his actions.

“We are writing to congratulate you for holding Ms. Hilton accountable for her actions and ordering her to fulfill her sentence.” Richardson wrote, along with Chuck Hurley, CEO of Mothers Against Drunk Driving. Both men urged the judge to consider the benefits of mandatory interlock devices in future drunk driving cases.

“We believe this case underscores the importance and need for tough DWI laws.” The two wrote in the letter released by the governor’s press office. “We found in New Mexico that the mandatory installation of an ignition interlock is an invaluable law enforcement tool and worth consideration by your court in future cases. This interlock prevents a driver from operating a vehicle while under the influence.”

Richardson campaigned in Denver and Pueblo, Colorado on Friday.

The GOP rival for the nomination made the comments in an interview Friday on Iowa Public Television’s “Iowa Press” show.

Tancredo – who strongly opposed McCain on the immigration bill – has built his campaign around the issue. “This is becoming as big an issue for him as is for me in a way,” he said. The fact that the immigration legislation failed, he said, should send a clear message to McCain and his supporters.

“[T]his is sort of the death knell for John McCain's campaign,” Tancredo said.

But in his first public reaction to the Senate setback, McCain told a town hall meeting in Pella, Iowa on Friday that he was “disappointed but I respect the process and respect the views of those who disagree.” McCain added, “I hope we can revisit the issue.”

“The President of the United States and I and many others were hopeful that we could come to some conclusion on this. Well, my friends, because we didn't then, as I said, several hundred people will cross the Arizona border today and into Arizona and go around the country, and several hundred tomorrow and then the next day. So it's not an issue that we can say, well, it's over. Because it's not over,” McCain said. “We still have broken borders and we still have this problem of not finding out who these people are.”

McCain defended his efforts on the immigration deal, telling reporters, “I do what I think is right. The people of Arizona sent me to Washington to do the hard things.”

ATLANTA (CNN) - One day after Sen. John McCain announced he would not participate in the Iowa GOP straw poll, the Arizona Republican visited the Hawkeye State and expressed no regret for making that decision. But McCain emphasized that he still planned on campaigning in the state and would compete in the Iowa Caucuses being held in January.

Speaking at a town hall meeting in Pella, Iowa, McCain made it clear that he wants to “focus all our attention getting ready for the caucus which is the real determining factor.”

McCain, along with former New York City Mayor Rudy Giuliani, made back-to-back announcements Thursday that they would not play in the August 11, straw poll. The poll, held in Ames, Iowa, traditionally has been a solid measure of a candidate's organizational strength.

McCain: 'We still have broken borders'

WASHINGTON (CNN) - Arizona Sen. John McCain, a major proponent of the immigration reform bill and a representative of a border state, said he hoped the Senate would revisit the issue of immigration because, he said, enforcing the border is a matter of "national security."

"Well, my friends, because we didn't [pass immigration reform], then, as I said, several hundred people will cross the Arizona border today and into Arizona and go around the country, and several hundred tomorrow and then the next day," McCain said at a press conference in Iowa on Friday. "So it's not an issue that we can say 'well, it's over' - because it's not over. We still have broken borders, and we still have this problem of not finding out who these people are."

The bipartisan bill in the Senate included a plan to enforce the border while giving a path to legalization for millions of illegal immigrants already working in the United States. The majority of Democrats and President Bush favored the bill, but most conservatives were against it. McCain had received criticism from some conservatives for his support for the bill.

"I was disappointed that that happened," McCain said. "But I respect the process, and I respect the views of those who disagree." 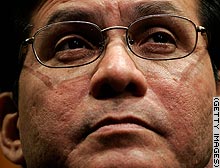 WASHINGTON (CNN) — The Senate will hold a politically-charged vote Monday related to a no-confidence resolution in the embattled Attorney General Alberto Gonzales.

In a statement issued Friday, Sen. Charles Schumer, D-New York, an author of the no-confidence resolution, said if all senators followed their conscience, ‘this vote would be unanimous.’”

“However, the president will certainly exert pressure to support the attorney general, his longtime friend,” Schumer added. “We will soon see where people’s loyalties lie.”

The attorney general is under scrutiny by Congress over last year’s dismissal of eight U.S. attorneys.

Schumer's statement is in reference to a procedural vote Monday on whether to proceed to a direct "no confidence" resolution.

Senate Republican leadership aides tell CNN most Republicans will vote against the motion, primarily because they view the resolution as politically motivated. Schumer heads the Senate Democratic Campaign Committee.

“I think that if and when he sees that coming, that he would prefer to avoid that kind of an historical black mark,” the Pennsylvania senator told CBS’ “Face the Nation” on May 20.

But a day after Specter’s comments, Bush reiterated his support in Gonzales and denounced the prospect of a no-confidence vote as “pure political theater.”

Brownback predicted he will do well in the Iowa straw poll.

Brownback made the announcement at his Iowa campaign headquarters, two days after former New York City Mayor Rudy Giuliani and Arizona Sen. John McCain announced they were skipping the event.

"People deserve to know where a candidate stands, and you don't declare yourself the winner before the game is played," Brownback added in a subtle dig toward the former Massachusetts governor.

"This will be a great contest between a Midwestern conservative farmer and a Northeastern liberal Republican who has flip-flopped on fundamental issues and will find limited support in Iowa as the summer goes on," he said.

After Giuliani and McCain announced they planned to skip the Iowa event, Romney's campaign spokesman Kevin Madden touted Romney's organization in the Hawkeye State and said "It looks as if we just beat those campaigns in Iowa two months earlier than we had planned on beating them."

The straw poll, sponsored by the state Republican party and set to be held in Ames, Iowa, on August 11, has traditionally been seen as a barometer of a candidate’s organizational strength in the early-voting state.

WASHINGTON (CNN) - Television star and former Sen. Fred Thompson will make his first trip to New Hampshire as a potential presidential candidate later this month, according to the New Hampshire Union Leader.

The Tennessee Republican started to "test the waters" for his campaign by beginning to raise money and hire staff about a week ago. He is expected to make an official presidential announcement as early as July.

Republican State Senate Minority Leader Ted Gatsas, A high ranking New Hampshire official, told the Union Leader Friday that Thompson agreed to show up to a fundraiser to benefit the Senate Republican PAC on June 28. General tickets cost $50, and supporters can pay $500 for a private reception with Thompson. The fundraiser will take place in Bedford, New Hampshire.

WASHINGTON (CNN) - Senators on all sides of the immigration bill were quick to assign blame for the bill's defeat Thursday night.

The veteran Republican from Mississippi blamed Reid for pushing for the vote too early. In fact, Lott said that just an hour before the critical vote he pleaded with Reid to give GOP leaders just 12 more hours to secure more votes. "He decided not to," Lott lamented.

Sen. Lindsay Graham, R-South Carolina, who helped write the bill, also blamed Reid for curbing GOP amendments to the bill. He said 10 to 12 more amendments could have pushed support for the bill up to 65 to 70 votes.

"I still think that's possible," said Graham, who vowed to find a way to get the issue back on the floor. "I'm hopeful that we'll get our act together and try to find a solution to this problem. We're very close. That's frustrating."

But Democrats passed the blame to Bush, who they said sunk the bill with his hands-off despite his support for it.

"When the president calls Harry Reid and says I can get some more votes for you, we'll come back to it," said Sen. Chuck Schumer, D-New York, a supporter of the bill. "But until that time we can't. They say he made some phone calls but he could only deliver six or seven votes."

END_OF_DOCUMENT_TOKEN_TO_BE_REPLACED

A motion to cut off debate on the measure failed Thursday night, stopping the proposal from coming up for a vote. Senate Majority Leader Harry Reid had said earlier that if the motion was not approved, it would be "over with ... gone."

But Bartlett told CNN that Bush wants Reid to consider putting the bill back on the table.

Bartlett was asked about the bill - one of the president's top legislative priorities - as Bush prepared to leave the G8 Summit in Heiligendamm, Germany, for Poland.

The procedural motion to cut off debate and move toward a vote on the bill drew only 45 votes in favor, well short of the 60 required for passage under Senate rules. Fifty senators voted against the motion.

Reid, D-Nevada, had said that if it failed he would pull the bill from the floor to let the Senate proceed to other issues.

Jefferson: 'This is not who I am'

Watch Jefferson's comments after he entered a not guilty plea Friday.

WASHINGTON (CNN) - Rep. William Jefferson pleaded not guilty Friday to numerous charges in a federal corruption indictment, saying the allegations against him "were contrived, many of them as part of a sting" operation.

"I implore you - the press and the public - to keep an open mind," he said outside the courthouse after his trial was set for January 16.

He vowed to fight as hard as it takes. "We will sell every stick of furniture in our home, and everything else that we may possess, to clear our name and to see that justice is done."

Prosecutors say he and his family members netted hundreds of thousands dollars in the scam.