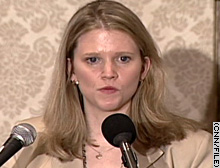 They are the first subpoenas issued since the U.S. Justice Department dismissed the lawyers - all but one in December.

The Senate panel, chaired by Sen. Patrick Leahy, D-Vermont, was issuing a subpoena to Sara Taylor, former White House political director and a key deputy to Karl Rove, the top political adviser to President Bush. She resigned a few weeks ago.

The committees have tried, with no success, to get Rove to testify at the hearings on the investigation.

A statement issued by White House spokesman Tony Fratto said: "We are aware of the judiciary committees' plans to issue subpoenas. We will respond appropriately. The committees can easily obtain the facts they want without a confrontation by simply accepting our offer for documents and interviews. But it's clear that Senator Leahy and Rep. Conyers are more interested in drama than facts."