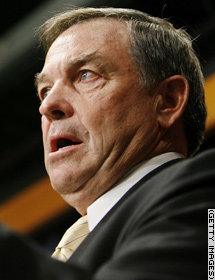 WASHINGTON (CNN) - Presidential Candidate Duncan Hunter thinks the President’s new plan to provide additional border security funds to the immigration bill is “terrible”. Speaking on CNN’s Late Edition with Wolf Blitzer, Hunter said, “I think it's a terrible trade for the president of the United States or the Senate, which really has this amendment, to trade border security for amnesty.”

The president Thursday proposed adding an amendment to the immigration bill that would immediately provide $4.4 million to beef up border security. “Border security is the obligation of the American government,” Hunter said. “That's like saying we'll send enough bullets to our troops in the field in Iraq or Afghanistan if you do something else, if you in Congress will make the right move. That should be a given.”