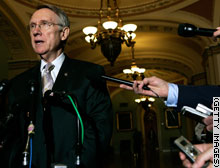 Poll respondents aren't as enamored of Sen. Harry Reid's Democrats, but still prefer them to Republicans.

WASHINGTON (CNN) - The Democratic leadership in Congress has lost some support among Americans - but not so much that the public wants Republicans back in charge, according to results of a new CNN/Opinion Research Poll released Friday.

Nearly half of 515 poll respondents, or 49 percent, said they disapproved of what Democratic leaders in Congress have done since taking over in January. Forty-two percent said they approve. In May, 49 percent of poll respondents approved and 44 percent did not.

The sampling error for those questions is plus or minus 4.5 percent, as they were asked of a half sample out of 1,029 poll respondents.

In general, Democrats still enjoy more favor than the GOP among Americans, the poll showed. Fifty-three percent of 907 poll respondents who are registered voters said they would vote for a Democratic candidate for Congress if elections were held today, as opposed to 41 percent who said they would vote Republican. The sampling error for that question is plus or minus 3.5 percent.

The telephone poll was conducted June 22 through 24.