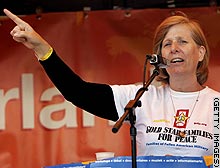 Cindy Sheehan is considering a run for Congress

(CNN) - Despite swearing off public life earlier this year, peace activist Cindy Sheehan would run against House Speaker Nancy Pelosi as an independent in 2008 unless the speaker moves to impeach President Bush, a Sheehan spokeswoman said Sunday.

Sheehan, a northern California resident, is taking part in a protest caravan from President Bush's home in Crawford, Texas, to Washington, which is scheduled to arrive July 23. Spokeswoman Tiffany Burns told CNN that Sheehan would challenge the speaker, who has held her San Francisco-area seat since 1987, unless Pelosi introduces articles of impeachment before then.

There was no immediate reaction from Pelosi's office to Sheehan's threat. The speaker said in November that calls for impeaching Bush were "off the table," but that Congress would push for an end to the widely unpopular, 4-year-old war under Democratic control.

Sheehan achieved national attention when she camped outside Bush's home throughout August 2005 to demand a meeting with the president over her son's death. While Bush ignored her, the vigil made her one of the most prominent figures among opponents of the war.

But in May, after congressional Democratic efforts to set a March 2008 goal for a U.S. withdrawal from Iraq failed in the face of a presidential veto, Sheehan quit the anti-war movement in disgust and declared that her son Casey - a U.S. soldier killed in Baghdad in 2004 - had died "for nothing."

She said she was exhausted by the personal, financial and emotional toll her campaign had taken, disillusioned by the failure of Democratic politicians to end the war and tired of a peace movement she said "often puts personal egos above peace and human life."