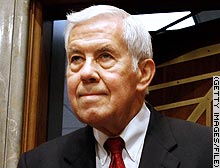 WASHINGTON (CNN)–Sen. Richard Lugar, (R – Indiana), who called last week for a change of course in Iraq, thinks American forces could leave by the middle of 2008. On CNN’s Late Edition with Wolf Blitzer, Sen. Lugar said, “I would think a majority of our forces could redeploy by the midpoint of next year, probably before that time, but by then. I've advocated a majority to come out of Iraq, that the rest to redeploy somewhere other than going door to door in the present surge.”

Sen. Lugar made headlines last week with a speech on the Senate floor calling for an end to the current strategy in Iraq. He is the first of three Senate Republicans to criticize the administration’s approach in the last two weeks.