All presidential campaigns are required to file detailed financial reports to the Federal Election Commission by midnight. 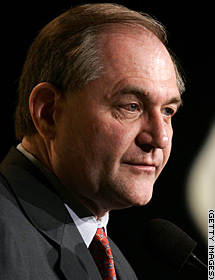 Gilmore said in a statement that his short-lived campaign "has been a positive and rewarding experience for me, for my family, and for my supporters," but he also expressed frustration with today's nomination process.

"I have come to believe that it takes more than a positive vision for our nation's future to successfully compete for the Presidency," he said. "I believe that it takes years of preparation to put in place both the political and financial infrastructure to contest what now amounts to a one-day national primary in February."

Approximately two dozen states have either moved or are considering moving their presidential primaries or caucuses to February 5, 2008.

Gilmore says he plans to form a state political action committee to support local Republican candidates in Virginia and also hinted at seeking office again in the future.

"I will be actively looking for other opportunities to continue in public service in the Commonwealth of Virginia," he said.

He began his presidential campaign in January.

Obama made the comments on Sunday to local reporters in Chicago.

"I think that the hip hop community musicians have such sway over our young people. That's where so much of their information is received." the Democratic presidential candidate said. "There's enormous potential for a positive message to be transmitted. There are a whole series of messages that could be sent to our young people and these rap artists, and hip hop artists they're creative enough that they can communicate that message in a way that will appeal to young people, so we just have to tap that creativity."

Earlier in the day, Obama addressed a church audience on Chicago's south side regarding the issue of youth violence.

He also planned to address a forum sponsored by the American Association for Justice, a trial lawyer's group, also in Chicago. Sens. Hillary Clinton, Joseph Biden, along with New Mexico Governor Bill Richardson, and John Edwards were also scheduled to address the group on Sunday as well.

WASHINGTON (CNN)– Despite the ongoing battle in Congress over Iraq war policy, National Security Adviser Stephen Hadley said the White House is pleased with the progress made this week on the Hill. On CNN's Late Edition with Wolf Blitzer, he said: "I actually think we've had a pretty good week both in the Senate and in the House...if you listen to Senator Warner, Senator Lugar - it's the things they are not calling for. They are not calling for an arbitrary withdrawal schedule. They are talking about how important it is, what happens in Iraq, how it affects our security here at home. They are talking about that we are going to have to be engaged with Iraq for some period of time."

Republican Senators John Warner (R – Virginia) and Richard Lugar (R – Indiana) authored a resolution this week that would redeploy some combat troops out of Iraq, and limit the remaining troops to training and counterterrorism missions.

(CNN)–Two leading Republican senators addressed their proposal on Sunday, to start a change in course of the war in Iraq.

On ABC's "This Week," Sen. Richard Lugar, R-Ind., and Sen. John Warner, R.-Va., discussed an amendment to the Defense Authorization Bill that they are sponsoring. It would mandate the administration immediately initiate planning for post-September contingencies in Iraq, including a drawdown or redeployment of forces.

"I'm hopeful that, in fact, most Democrats will support our amendment, just as a matter of common sense," said Lugar.

"I think that Senator Reid's thoughts are in error, and to this extent, that we really don't have the power, in Congress, right now, to bind the president to specific dates or specific policies, except in the extreme case that, in an appropriation bill, we would cut off the money for our troops in Iraq," said Lugar.

Lugar's co-sponsor on the legislation, Senator Warner, said he expected some change in strategy from the president. "Well of course, some modificaton to the strategy. But it's going to be taken in context of what his commanding officers recommend of him," Warner said. "He's the president. General Petraeus is not going to decide it," he said of General David Petraeus, the overall commander of U.S. military forces in Iraq. "Petraeus reports, the president decides. He is the commander in chief."