Richardson tells congress to ‘stand up’ in new ad 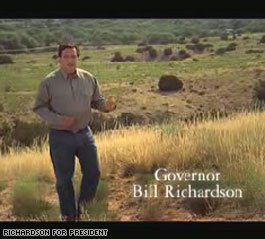 Richardson call on Congress to end the Iraq war in his latest ad.

WASHINGTON (CNN) - New Mexico Gov. Bill Richardson calls on members of Congress to “stand up to the president” to end the Iraq war, in a new television ad that began airing Wednesday in Iowa.

"Congress must stand up to a president who has put our brave military men and women in an impossible situation refereeing a civil war,” Richardson, a Democratic presidential hopeful, says in the ad. “Our troops are targets - viewed as occupiers. If George Bush doesn't get them out, as President, Bill Richardson will.”

In the latest CNN/WMUR-TV poll conducted by the University of New Hampshire, Richardson finds himself running third at 9 percent among Granite State Democratic primary votes, behind Clinton with 36 percent and Obama with 27 percent.