He may be president, but is he a contender?

WASHINGTON (CNN) - After a week of political fights in Washington, President Bush looked ready for one more as he headed to Camp David Friday.

Boxing great Sugar Ray Leonard brought his family to the White House, and stood in the VIP guest area to greet the president as he walked to the helicopter.

CNN White House Producer Erika Dimmler reported the President walked out onto the South Lawn alone, and upon seeing Leonard standing near the path that leads to the helicopter, put his two fists up in a mock boxing stance. Sugar Ray responded with a similar pose, and for a few moments they looked locked in battle.

It was a rare time Marine One wasn’t the center of attention on the South Lawn.

Afterward, Sugar Ray toured the new press office and briefing room with his family, even venturing beneath the podium to view what remains of the old White House swimming pool. There, he took the time to sign his name one of the faded old blue tiles, Sugar Ray Leonard, and the date.

(CNN) – Republican presidential candidate Rudy Giuliani fended off criticism from one firefighters’ group Friday while trying to win the support of others in the key state of South Carolina.

But at the same time, Giuliani faced more questions after the speech about a video released by the International Association of Firefighters, claiming Giulaini as mayor was unprepared for the tragedy. Giuliani said he hadn’t seen the video that was released last week yet. He defended his record, saying "I understand sometimes people's anger about that, tremendous frustration about that and sometimes there are political motives. People can make their own judgment about it. There is enough on the public record so I'm very comfortable and people can make their own judgment.”

Giuliani spoke to the gathering behind a podium shaped like the front of a fire engine. Praising them as “resilient” and brave, Giuliani said the role of firefighters has grown more important around the nation since September 11th. He said their job “is even more critical. They’re the first soldiers. They’re the first line of defense in the Islamic war against us.”

Some Thompson supporters are getting restless.

WASHINGTON (CNN) - For the online supporters urging "Law & Order" actor Fred Thompson to run for president, it's turning into a long summer.

Since May, the former Tennessee senator has been "testing the waters" for a 2008 White House run, launching a campaign Web site and beginning to raise money. A senior adviser confirmed to CNN that the actor and former senator will officially launch his bid for the White House after Labor Day.

But that may not be soon enough for many of his supporters. The self-described "Fredheads" – who populate scores of unofficial Fred Thompson blogs, forums and draft Web sites – are ready to jump in and join him now.

"What's the hold up?" wrote Keith Harper, who operates a forum called FredHeads.com out of Chattanooga, Tennessee. Harper said he didn't want to second-guess a politician's sense of timing, but said he worries Thompson's grassroots support could dwindle if he waits too long.

Since spring, Thompson has been cultivating a loyal following among conservatives online, regularly posting on blogs and right-leaning Web sites. Blogs supporting Thompson abound, and a crop of unofficial draft sites have gathered tens of thousands of signatures of people ready to support a Thompson bid.

Jeff Mitchell in Memphis, Tennessee, who has run the site DraftFredThompson.com since January, notes an "increasing anxiety" among the Fred faithful.

"New people come in, and 4-6 weeks after they come, they're still waiting," Mitchell said. But he thinks supporters are "anxious and excited" to get involved, rather than discouraged by the wait.

END_OF_DOCUMENT_TOKEN_TO_BE_REPLACED 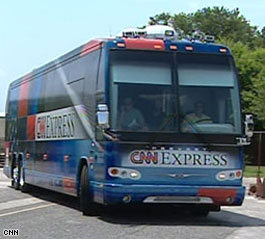 The bus arrived on campus Friday afternoon at the Citadel, in Charleston, South Carolina, site of the CNN–YouTube Democratic Presidential Debate.

The Election Express, which is not your average bus, will play a crucial role in the production of this innovative debate. The bus, which is a working newsroom, television studio and transmission center, will be working overtime on Monday night at 7pm ET, when the eight presidential candidates clash. The Election Express will serve as a satellite feed point for CNN’s coverage of the two hour debate, and all of the recorded YouTube questions will be transmitted from the bus.

The questions come from you. For the first time in presidential debate history, questions will come directly from the internet, submitted via the YouTube website. CNN’s Anderson Cooper will moderate the debate.

Clinton fired back at the Pentagon Friday after it called a question of hers 'premature.'

WASHINGTON (CNN) - A day after reports of a testy exchange between Democratic Senator and presidential hopeful Hillary Clinton and the Department of Defense, CNN has learned that Clinton and Sen. John Kerry will join forces to introduce legislation requiring the Pentagon to brief Congress on the military's contingency plans for withdrawing from Iraq.

In May, Clinton sent a letter to Defense Secretary Robert Gates requesting that Gates brief the appropriate congressional committees about the Pentagon's contingency plans for withdrawal. Clinton's May letter also asked, in the alternative, that Gates explain why no such plans existed.

Earlier this week, Defense Department Undersecretary Eric Edelman responded to Clinton's letter" "Premature and public discussion of the withdrawal of U.S. forces from Iraq reinforces enemy propaganda that the United States will abandon its allies in Iraq, much as we are perceived to have done in Vietnam, Lebanon and Somalia," wrote Edelman. Clinton, a member of the Senate Armed Services Committee, fired off another letter to Gates Thursday again requesting that the Pentagon brief Congress about withdrawal plans. Gates has yet to respond to Clinton's second letter.

CNN has learned that Clinton and Kerry are upping the ante and will introduce legislation that requires Gates to provide the congressional briefing Clinton has now requested twice. "From New Orleans to Baghdad, this administration has made planning a dirty word and an alien concept, and the damage to our country has been immeasurable as a result," Kerry told reporters on Friday. "We need to make sure that we are smarter getting out of Iraq than we were getting into Iraq," added Clinton.

END_OF_DOCUMENT_TOKEN_TO_BE_REPLACED

WASHINGTON (CNN) - President Bush on Friday signed an executive order specifying that the CIA is forbidden to use cruel or inhuman treatment - including insulting a person's religion or religious practices - when interrogating detainees, specifically suspected terrorists, the White House said.

The order interprets Common Article 3 of the Geneva Conventions, said a statement from White House spokesman Tony Snow. "Specifically, the interpretation ... is applied to the Central Intelligence Agency's detention and interrogation program whose purpose is to question captured al Qaeda terrorists."

It requires that any CIA interrogation program comply with federal law, including the prohibition of "cruel, inhuman or degrading treatment" in the Detainee Treatment Act of 2005, federal statutes against torture and the War Crimes Act, Snow said. 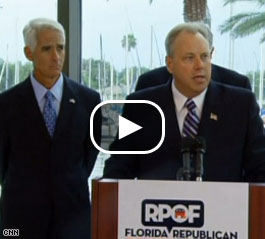 WASHINGTON (CNN) - Florida Gov. Charlie Crist announced Friday that the Republican Party of Florida will team up with CNN and YouTube to host a groundbreaking GOP presidential debate in September at the Mahaffey Theater in St. Petersburg.

For the first time in Republican presidential debate history, voters will utilize state-of-the-art video technology to directly question the presidential candidates on the pressing issues of the day.

“We are pleased that our Republican presidential candidates will have another opportunity to discuss the issues that are important to Florida’s voters,” Crist said. “This is a testament to the leadership of the Florida Legislature, which wisely made Florida a more important player in the presidential nominating process by moving Florida’s primary date forward.”

Crist is referring to Sunshine State lawmakers’ decision to move its primary up to Jan. 29, 2008 – much to the chagrin of the Republican National Committee and Democratic National Committee. It will now be the largest early state to vote in the presidential primaries and serve as the gateway into Feb. 5, 2008 when as many as 20-plus states hold nominating contests.

“This debate is an unprecedented opportunity for people across the nation to ask the Republican presidential candidates where they stand on the issues that are important to them, using mediums that are integral to the 2008 presidential election cycle - CNN and YouTube,” said Republican Party Chairman Jim Greer. “The debate is further evidence of Florida’s growing and prominent role in the 2008 Presidential election cycle, and we are excited to partner with CNN and YouTube to bring the Republican Presidential candidates to viewers across America.”

CNN/U.S. President Jon Klein noted that his network and YouTube has “created a one-of-a-kind format to enable American voters to pose their own questions directly to the Republican candidates themselves.

“We are grateful to the Republican Party of Florida and to Governor Crist for their partnership and for bringing the CNN-YouTube debate to this critical early primary state,” Klein said.

McConnell has set the bar low for his party’s chances in 2008.

WASHINGTON (CNN) - Republicans are unlikely to win back control of the Senate in 2008, their Senate leader, Mitch McConnell, said Friday, gloomily predicting that "holding our own is about all we could hope for."

But McConnell didn't blame the low approval ratings of the Congress or the president or public rejection of the Iraq war for the anticipated poor showing by the GOP.

"The numbers are against us," he told reporters at a Capitol news conference, noting that 22 Republicans and just 12 Democrats are up for re-election this cycle. "It would take an extraordinarily good day to get back up to 50. So our goal is to stay roughly where we are.

"If we had a good day we might be able to get it back narrowly," he said. "But that's just a realistic assessment of where we are."

Kerry is calling for the Falcons to suspend Michael Vick.

"As we have read in the Vick indictment, poor-performing dogs are tortured, maimed and killed. This illegal and despicable activity has no place in a civilized society," Kerry, a former Democratic presidential nominee, said in a letter to the commissioner.

He added, "On behalf of millions of sports fans and dog lovers, I urge you to treat Mr. Vick’s dogfighting indictment with the very serious attention it deserves and suspend him from the League until the resolution of legal proceedings."

Kerry said he will introduce legislation aiming to eliminate dogfighting by making it illegal to send pictures or run web sites related to the sport and to own or train dogs for the purpose of dogfighting.

Clinton in charge in South Carolina

Clinton holds a strong lead over her Democratic rivals in South Carolina, a new poll indicates.

Former Vice President Al Gore, who has repeatedly said he has no plans to run for president, draws 10 percent in the poll. New Mexico Gov. Bill Richardson and Delaware Sen. Joe Biden were the only other two candidates to register support in the poll, drawing 2 percent, and 1 percent respectively.

The poll, conducted on July 16-18, interviewed 1,052 adults in South Carolina, including 380 who say they will vote in the 2008 Democratic primary. It carries a margin of error of plus or minus 5 percentage points.

The poll also indicates race plays a large roll in how South Carolina Democrats plan to vote. Among whites, Clinton has a thin 3 point lead over Edwards, 30 percent to 27 percent, with Obama coming in third at 18 percent. Meanwhile, among blacks, Clinton holds a 16 point lead over Obama, 47 percent to 31 percent, with Edwards drawing a paltry 4 percent. This breakdown carries a margin of error of plus or minus 8 percentage points.