WASHINGTON (CNN) - One sentence in President Bush's weekly radio address was deleted overnight after some Democrats privately complained that it was overly partisan on the explosive subject of reforming the administration's warrantless wiretap program, White House officials confirmed Saturday.

In the initial radio address, which was taped Friday, Bush charged that the country is less safe because of Democratic delays in passing legislation that would reform the Foreign Intelligence Surveillance Act.

"Every day that Congress puts off these reforms increases the danger to our nation," the president originally said.

White House officials say that line of audio was deleted after Democrats saw a transcript of the remarks distributed Friday afternoon.

The extremely rare change to a taped address comes at the end of a week in which the White House faced a blizzard of questions about whether Attorney General Alberto Gonzales committed perjury in testimony to the Senate Judiciary Committee about the surveillance program.

A senior White House official suggested Saturday that the administration wanted to turn the temperature down on all the controversy and get reform legislation passed.

"We've been making good progress with the Democrats on this legislation," a senior White House official told CNN.

"Some of them felt the sentence sounded too political. Our sole objective has been to get the law changed - not to seek partisan advantage. So we were happy to make the requested change, particularly in light of Democrats' expressed determination to make necessary changes in law."

(CNN)–Speaking before an audience of college Democrats on Saturday, Senator Hillary Clinton was interrupted by a heckler. An older woman carrying a sign that read, "She doesn't care, all she wants is the power" yelled at Clinton as she spoke. Several Clinton supporters in the audience returned shouts to the protestor and pushed her out of the room.

"One of the things I love about politics, you never know what the day will bring," Clinton said.

Clinton, who is seeking the Democratic presidential nomination, delivered remarks to the College Democrats of America National Convention. It was held on the campus of the University of South Carolina in Columbia, South Carolina.

McCain is holding firm on his Iraq stance

(CNN)–Despite the effect the issue is having on his poll numbers, Senator John McCain says he will not change his stance on the Iraq war. "I'll take my stand on this war," he said Saturday in Greenville, South Carolina. "I would much rather lose a campaign than a war."

He took issue with Congressional Democrats who, he said, want to pull U.S. troops out of Iraq too early. "We will not allow the United States to lose this war," the Arizona Republican said. "If the war's lost, who won? Al Qaeda? Tell that to the 160,000 brave young Americans who are serving and sacrificing in Iraq today as we speak."

McCain attended a minor league baseball game in Greenville on Friday evening. He was due to meet with supporters in Aiken, South Carolina Saturday afternoon. 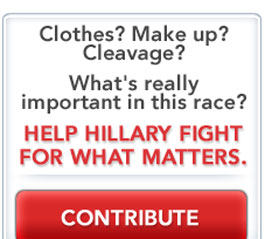 Clinton’s campaign is seeking to raise cash over recent attention devoted to the candidate's appearance.

“Frankly, focusing on women’s bodies instead of their ideas is insulting,” Ann Lewis, a senior adviser to Clinton, wrote in the e-mail. “It’s insulting to every woman who has ever tried to be taken seriously in a business meeting. It’s insulting to our daughters - and our sons - who are constantly pressured by the media to grow up too fast.”

“Take a stand against this kind of coarseness and pettiness in American culture,” Lewis adds, with a link to make a contribution to the campaign. “And take a stand for Hillary, the most experienced, most qualified candidate running for president.”

Lewis is referring to an article published in last Friday’s Washington Post Style Section, in which reporter Robin Givhan claims Clinton’s cleavage was “on display” during a recent Senate floor speech.

“With Clinton, there was the sense that you were catching a surreptitious glimpse at something private. You were intruding - being a voyeur. Showing cleavage is a request to be engaged in a particular way,” Givhan wrote in the article which detailed Clinton’s style evolution over the years. “It doesn't necessarily mean that a woman is asking to be objectified, but it does suggest a certain confidence and physical ease.”

Lewis also indirectly aired her grievances with Clinton’s Democratic competitors John Edwards and Barack Obama, who, at the CNN/YouTube debate last Monday, discussed Clinton’s “coral” jacket. When asked to say something he didn’t like about the candidate to his left, Edwards joked he wasn’t fond of her jacket, to which Obama replied that he liked it.

“There will always be people who try to make a campaign about make up, clothes, and now, even cleavage,” Lewis wrote. “In fact, if you watched the last debate, you remember that Hillary's jacket was the subject of some discussion among the candidates - because it was coral.”

Cheney out of surgery

Cheney arrived at the hospital in the morning with his wife Lynne for what is described as minor surgery and left a little over four hours later.

"The Vice President visited his doctors from the Medical Faculty Associates of George Washington University today for scheduled replacement of his implantable cardioverter-defibrillator (ICD)," said Megan McGinn, Cheney's spokeswoman. "The device was successfully replaced without complication. The Vice President has returned to his home at the Naval Observatory and has resumed his normal schedule."

The defribillator was orginally placed in Cheney's chest in 2001 to shock his heart in case of an irregular heatbeat.

The procedure to replace the 2001 device was expected to last anywhere from 30 minutes to an hour and usually occurs while the patient is under heavy sedation rather than general anesthesia and requires no overnight observation.

WASHINGTON (CNN) - A senior administration official confirmed to CNN on Saturday that the United States is developing a proposed $20 billion, 10-year arms sales package for Saudi Arabia aimed at giving the Saudi military an upgraded capability to counter Iranian aggression in the Persian Gulf region.

The proposed sale was first reported in the New York Times.

The official spoke to CNN on the condition of anonymity because discussions remain ongoing with the Saudis. And, none of the terms of the package have been finalized.

The future of the package is expected to reverberate in Israel, which has been concerned about Saudi arms deals in the past.

"This is all about Iran," said the official, who noted that the Bush administration is mindful at the same time that Israel must maintain its "qualitative edge" in the region.

One of the most potentially controversial portions of the proposed sale will be the first sale to the Saudis of satellite-guided bombs known as JDAMs. The sale may include both a 500-pound and 2,000 pound version of the aerial bomb.

The Israelis are said to be very concerned about the Saudis having that precision-strike capability. so the United States will discuss basing the weapons as far away from Israel as possible, the official said.

Other elements of the sale include new naval vessels, an advanced version of air-to-air missiles already used by the United States and advanced Patriot missiles.

This entire matter is expected to be a major portion of a meeting next week between Defense Secretary Robert Gates, Secretary of State Condoleezza Rice and Saudi officials.

The sale would have to be approved by Congress and the Bush administration is talking about the package at an early stage to avoid opposition from and controversy among lawmakers.

WASHINGTON (CNN) - The House Friday approved security legislation implementing many of the recommendations of the 9/11 commission.

The vote for passage was 371-40. The Senate passed the bill Thursday by an 85-8 vote, so Friday's action means the measure goes to President Bush's desk for his signature.

"With this bill, we will be keeping our promises to the families of 9/11," said House Speaker Nancy Pelosi, D-Calif. "We'll be honoring the work of the 9/11 commission and we will be making the American people safer."

Despite the broad bipartisan support, critics of the bill say it does not provide the right for airport screeners to unionize and that some of the rules are impractical, such as requiring all maritime cargo in three years to go through security screening.

"This proposal is simply not practical because of the huge volume, some 11 million containers per year coming into our seaports," said Sen. Susan Collins, R-Maine. Despite her criticism, Collins voted for the bill.