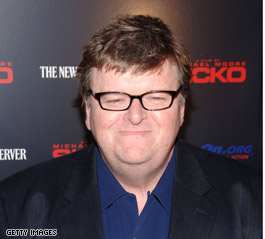 Filmmaker Michael Moore at the premier of "Sicko"

WASHINGTON (CNN) - Former Arkansas Gov. Mike Huckabee reached out to filmmaker and liberal activist Michael Moore on Monday, suggesting that the two of them meet to discuss ideas about health care reform because they "could find some common ground and make some positive change."

"The two of us may have something in common: a passion for reforming the health care system in America," Huckabee, a Republican presidential candidate, said in a letter to Moore. "While I respect your efforts to call attention the health care crisis in this country in your movie “Sicko,” I feel that your view that all would be improved with free universal and government provided health care is simplistic."

Huckabee told Moore about a program he implemented while serving as governor of Arkansas that provided 200,000 kids with health insurance and basic benefits to people working in small businesses. He suggested "focusing on prevention, wellness, and early testing" and "incentives to encourage healthy behavior such as eating less, exercising more and quitting smoking."

Since losing over 110 pounds, Huckabee has become a major proponent of encouraging people to change to healthier lifestyles. He will be a guest on The Situation Room on Monday afternoon.