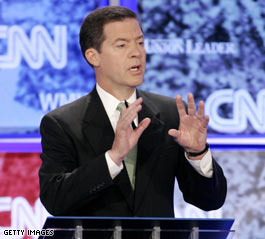 WASHINGTON (CNN) - Kansas Sen. Sam Brownback demanded an apology from former Arkansas Gov. Mike Huckabee on Wednesday for an e-mail sent to religious leaders in Iowa as part of what Brownback called an "effort to demoralize his supporters."

Huckabee said he had nothing to do with Rude's letter. “We are glad that Rev. Rude issued an apology and clarification for his comments. They were not authorized by, disseminated by, approved by, or condoned by the campaign," Huckabee said in a statement.

But Brownback's campaign still slammed Huckabee for not directly apologizing for the letter.

Brownback and Huckabee are two of the candidates planning to participate in Iowa's straw poll in less than two weeks.