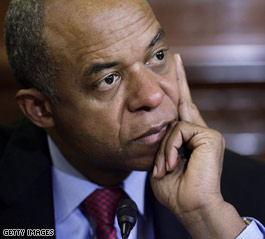 WASHINGTON (CNN) - A federal appeals court ruled Friday that an FBI search last year of the congressional office of Rep. William Jefferson, D-La., violated the Constitution, because neither he nor his lawyer could protect materials they deemed privileged from being taken by the government.

Federal prosecutors allege that Jefferson took more than $500,000 in bribes and sought millions more, using a network of family companies to conceal the money. Jefferson denies the charges.

The court ruled that the search violated the "Speech and Debate" clause of the U.S. Constitution, which is meant to protect legislative business from any action by the executive branch, such as the Justice Department.

"We hold that a search that allows agents of the executive to review privileged materials without the (congressional) member's consent violates the clause," the ruling says.

However, the court said that only the seizing of paperwork violated the clause; "the copying of computer hard drives and other electronic media is constitutionally permissible."

Before the search, the government set up a special "filter" mechanism in which any materials that the congressman claimed fell under his privilege as a congressman would be kept away from the agents investigating him. But the court ruled that that mechanism was insufficient.

"We conclude that the congressman is entitled ... to the return of all materials (including copies) that are privileged legislative materials under the speech or debate clause," the court said in its ruling. There have been disagreements between Jefferson's lawyers and the Justice Department over how much of the material taken in the search was privileged.

The court is to determine which materials are returned to Jefferson.

In the raid of Jefferson's office in the House Rayburn Building, FBI agents seized a wide variety of paperwork as well as computer hard drives.

Jefferson's attorney, Robert Trout, issued a statement welcoming the decision, saying it "underscores the fact that the Department of Justice is required to follow the law, and that it is bound to abide by the Constitution.

Those principles will continue to be important as we raise additional legal challenges to the overreaching by the government in this case.

"We are confident that as this case moves forward, and when all of the facts are known, we will prevail again and clear Congressman Jefferson's name."

Justice Department spokesman Brian Roehrkasse issued a statement saying the department "is pleased that the D.C. Circuit opinion does not find that the search of a congressional office is unconstitutional."

But he added, "We are disappointed with the ruling that requires that a member of Congress be provided advance notice and the right to review materials before the execution of a search warrant."

Roehrkasse said "the indictment and prosecution of Congressman Jefferson will not be negatively impacted by this decision."

The Justice Department has other evidence in its case against the congressman, including finding $90,000 in his freezer.

A grand jury returned a 16-count indictment against Jefferson on June 4, 2007, that included charges of racketeering, solicitation and conspiracy to solicit bribes, money laundering, wire fraud and obstruction of justice.

Jefferson's homes in Washington and New Orleans were raided in August 2005. The following May, investigators raided his Capitol Hill office, sparking a furor among congressional leaders who argued the search violated the Constitution's separation of powers.

In court papers defending the 2006 search, investigators disclosed that they had found $90,000 in cash in the freezer of Jefferson's Washington home, part of a $100,000 payment delivered by an informant in the bribery probe,
according to federal agents.

Jefferson received the cash in one of 11 bribery schemes prosecutors said they had outlined during the two-year investigation.

Chuck Rosenberg, the U.S. attorney in Alexandria, Va., where the charges were brought, has said that Jefferson solicited a bribe from an informant in December 2004 "while in a congressional dining room in Washington, D.C."

He said Jefferson asked for a 5 to 7 percent share of a company the cooperating witness controlled, which would go to a relative of the congressman.

In return, Rosenberg said, Jefferson offered to use his office to promote the company's joint venture in Nigeria, and met with someone Rosenberg described only as "a high-ranking executive branch official from Nigeria" in July 2005.

The money in his freezer was supposed to go to the Nigerian official, and Jefferson had told the cooperating witness that he had delivered "the African art" to that official days before his home was raided, according to the federal attorney.

According to Friday's ruling, jury selection in the case is to start in January 2008.