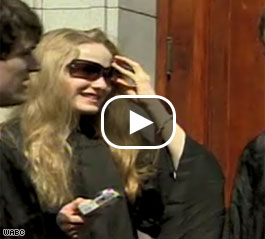 WASHINGTON (CNN) - Former New York City Mayor Rudy Giuliani may not be able to count on support from his own daughter, Slate.com reported Monday.

On his daughter Caroline's Facebook profile, the self-described liberal was a part of a group that supports Illinois Sen. Barack Obama's presidential bid. After Slate.com emailed her about it, she immediately left the group, the web site reported.

But a spokeswoman for Caroline said her action didn't mean that she is supporting Obama, or any other candidate in particular. "Before the presidential campaign got underway, Caroline added herself to a list on Facebook as an expression of interest in certain principles," Joannie C. Danielides said in a statement. "It was not intended as an indication of support in a presidential campaign and she has removed it. Caroline is not commenting on the 2008 election."

While many of the other candidates' entire families have been visible on the campaign trail, Giuliani's children have yet to make an appearance. His son, Andrew, said he will not help the campaign because he wants to concentrate on becoming a professional golfer, The New York Times reported in March.

Since his very public divorce from his second wife and his marriage to Judith Nathan, Giuliani's relationship with his children has been strained. Giuliani stopped going to his children's events, missing Andrew's high school graduation and Caroline's plays, the Times also reported.

Giuliani talked about his daughter at a campaign stop in Clear Lake, Iowa on Monday.

"My daughter I love very much," Giuliani said. "I have great respect for her, and I’m really proud of her. And I don’t comment on children because I want to give them the maximum degree of privacy. I think children in situations like this deserve to have the maximum degree of privacy. And the best way to preserve that is, except to point out that you love them and care about them and you’re very, very proud of them, just don’t comment about it."

UPDATE: Andrew Giuliani tells ABC News he supports his father's presidential bid and thinks he would be a "great president."

On his sister's support of Obama, Andrew Giuliani said "I love my sister very much and I respect her opinions. "One of the great things about our parents is they've always encouraged us to see the world for ourselves."

Related: "Obama girl" and "Giuliani girl" duke it out