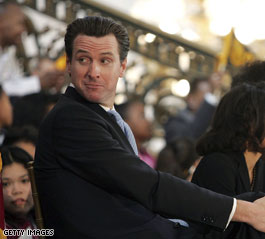 “Hillary Clinton has been fighting for progressive values for decades and she has shown us all that she is ready to lead our country as we face enormous challenges,” Newsom said Friday in a joint appearance with Clinton.

Newsom will also become a co-chair of the campaign.

Newsom and Villaraigosa have both been the subject of recent controversy, each admitting earlier in the year to extramarital affairs.

California, one of the many states to move up its primary to February 5, will likely play a key role in determining the presidential nominees.