Race to '08: Who can claim victories in Iowa?

Huckabee, second from left, plays with his band, Capital Offense as an Elvis impersonator from Duncan Hunter's campaign helps out with a rendition of Johnny-Be-Good Saturday.

WASHINGTON (CNN) - In the battle for the republican nomination - Mitt Romney did what he was expected to do - -win this weekend's straw poll in Ames, Iowa. But the guy who came in second could be the real success story. And that guy is Mike Huckabee.

The former Arkansas governor is not a household name. He even admits it. "I know I'm relatively unknown to the national scene,” says Huckabee.

Huckabee’s also not your typical politician. He’s an ordained Baptist minister who plays guitar in a rock and roll band. He performed for his supporters Saturday at Ames. And now, thanks to a strong second place finish at the Iowa Republican presidential straw poll - he's getting some attention.

Huckabee opposes abortion rights - and he's against legalizing gay marriage. That could play well with social conservatives who may have problems with Republican candidates much higher up in the polls. "When people say we're just dissatisfied with the field that may be the top of the field but now they're beginning to realize there's another candidate out there and they don't have to keep waiting on Fred Thompson to get in the race,” says Huckabee.

“It was a big win for Huckabee in Iowa, because his polling numbers have consistently been in the low single digits in most national and state surveys,” says CNN Political Editor Mark Preston. “To prove that Saturday's strong showing wasn't a fluke, Huckabee must now show he can raise the millions of dollars needed to be a top flight candidate."

END_OF_DOCUMENT_TOKEN_TO_BE_REPLACED

Parting is such sweet sorrow

Democrats think Clinton is strong, but do they like her?

Democratic voters polled in the new survey also consider the senator from New York to be the strongest leader and the most experienced, but Sen. Barack Obama has a light edge on likeability.

Clinton gets her lowest marks when Democrats are asked which candidate is the most honest.

Fully 59 percent of those questioned in our new poll say Clinton has the right experience to be president. Only 9 percent feel that way about Obama. Meanwhile, 47 percent say she would be the strongest leader, and 46 percent say she is the most qualified to be commander in chief.

Obama is presenting himself on the campaign trail as the candidate of change, but only 27 percent of the Democrats we questioned say the senator from Illinois is most likely to change the country. That’s second to Clinton - 40 percent of those polled say she’s most likely to bring change.

So what are Clinton’s weak points? One appears to be honesty. Just 28 percent say that Clinton is the most honest candidate, compared to 24 percent for Obama.

The other is likeability: 34 percent say Obama is the most likeable candidate, topping Clinton on that measure by three points.

END_OF_DOCUMENT_TOKEN_TO_BE_REPLACED 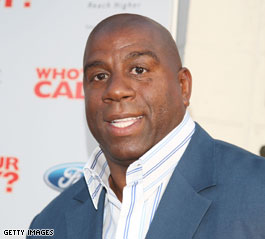 'Magic' Johnson will host a fundraiser for Clinton next month.

The Clinton campaign tells CNN the event, also to be attended by musician Quincy Jones and music producer Berry Gordy, will be held at Johnson's home.

The competing fundraisers highlight both candidates' courtship of prominent African-Americans as they battle for their party's nomination.

In a statement, Johnson said Clinton "has the experience and knowledge to help lead our country," according to the Associated Press.

Last May, Oprah told Larry King she chose to support the Illinois senator because she knows him “personally” and knows “what he stands for.”

"I think that what he stands for, what he has proven that he can stand for, what he has shown, was worth me going out on a limb for. And I haven't done it in the past because I haven't felt that anybody — I didn't know anybody well enough to be able to say, I believe in this person," Oprah said.

In the same interview, Oprah said her endorsement of Obama does not suggest she is against Clinton.

WASHINGTON (CNN) - Top Bush aide Karl Rove may be set to resign his White House post by the end of August, but CNN Chief National Correspondent John King reports the man known as the "Architect" is likely to play an influential role in the 2008 presidential election.

"I would not be surprised at all, and I would predict on this day that he will indeed have a voice in the '08 presidential election," said King Monday on CNN.

Rove "very much wants to help the party steer its course in the '08 presidential election,” according to two close Rove friends who spoke to King.

But the friends insist Rove has not chosen a particular candidate to back and will likely wait until the field clarifies itself before assuming any type of role.

The question remains whether Rove's playbook of appealing to base voters will be followed in 2008. The strategy produced two presidential victories in 2000 and 2004, but after a bruising loss in 2006, some Republicans think it’s time to break from his strategy and target moderate voters more, King added.

DES MOINES, Iowa (CNN) - After apologizing to a crowd for being an hour and fifteen minutes late to the launch of his "Fighting for One America" bus tour Monday morning, Democratic presidential candidate John Edwards said that his wife Elizabeth, who was set to be on stage with her husband and two youngest children, was absent because she ate something that "didn't agree with her."

When asked by a reporter if the former senator thought the sickness could be related to Mrs. Edwards' cancer treatments, Edwards said, "Oh no, no. I don't think it has anything to do with that."

Due to the delay, the Edwards campaign canceled a scheduled stop at the Iowa state fair.

Leahy: Rove leaving under a cloud

Watch CNN's Suzanne Malveaux report on why Rove decided to resign his post.

WASHINGTON (CNN) – Sen. Patrick Leahy, D-Vermont, said in a statement released Monday that longtime Bush advisor and White House aide Karl Rove has “acted as if he was above the law.”

Leahy, as chairman of the Senate Judiciary Committee, is leading the congressional investigation of the Bush administration’s firing of several U.S. attorneys. Leahy’s committee subpoenaed Rove as part of its investigation, but the White House refused to let Rove testify, instead asserting a claim of executive privilege for Rove’s communications with President Bush.

“I continue to ask what Mr. Rove and others at the White House are so desperate to hide,” Leahy said in his statement.

After vowing to continue the investigation into the U.S. attorney firings, Leahy also said Monday that “there is a cloud over this White House, and a gathering storm. A similar cloud envelopes Mr. Rove, even as he leaves the White House.”

Cut it out: Obama's wife on Barack being 'black enough'

(CNN) - Michelle Obama dismissed any lingering questions over her husband’s racial identity at a “Women for Obama” event in Chicago Sunday, demanding that people “cut that nonsense out because it is not helping our children.”

The comments came two days after Democratic presidential hopeful Barack Obama addressed in detail whether he was “black enough” for the African American community at the annual convention of the National Association of Black Journalists in Las Vegas.

Michelle Obama told the audience Sunday, “What are we saying to our children if a man like Barack Obama isn’t black enough? Then who is? Who are they supposed to be? So we have to cut that nonsense out because it is not helping our children.”

At the recent National Association of Black Journalists convention, Sen. Hillary Clinton, D-New York, was also asked by CNN’s Suzanne Malveaux whether she was black enough to sustain the kind of support her husband former Pres. Bill Clinton has long had in the African-American community.

Clinton and Obama lead most national polls for the 2008 Democratic presidential nomination, and both are aggressively vying for the support of the African-American community, historically a very reliable voting bloc for the Democratic Party.

Former Iowa Gov. Tom Vilsack, once a presidential candidate and now a national co-chair of her campaign, unveiled the spot at a news conference Monday morning in Des Moines.

"Too many Americans - middle class families, families without health care and child care, returning veterans – have been invisible to this President and this government,” he said. “That will change when Hillary Clinton becomes President.”

The ad will start running in Iowa on Tuesday.