Illinois state Republican party chairman, Andy McKenna, said Romney won the Illinois Straw poll at the Illinois State Fair. "Congratulations to Mitt Romney, whose strong showing today indicates he has begun to put together a strong statewide organization," McKenna said. "There's no question that Illinois' demographics closely match those of the United States and this could be an indication as to whom Illinois voters are leaning toward this coming February."

To be included, participate candidates were required to have participated in one of the previously held debates with other Republican candidates, or have polled above 5 percent in a national, independent poll.

Biden's son to be deployed to Iraq

Biden said his son will be deployed to Iraq.

(CNN) - Democratic presidential candidate Joe Biden told a crowd at the Iowa State Fair Thursday that his son will be deployed to Iraq.

Beau Biden, Delaware’s attorney general, is a captain in the Army National Guard. His unit has been notified that it should be prepared to deploy in 2008.

“He’ll go…I don’t want him going,” the Delaware senator told the crowd. “But I don’t want my grandsons or granddaughters going back in 15 years. So how we leave makes a big difference.”

The Delaware senator’s son was in attendance as Biden addressed the crowd in Des Moines.

Republican presidential candidates John McCain and Duncan Hunter also have sons who have either served or have been called for duty in Iraq.

UPDATE: The Biden campaign tells CNN his son’s unit was placed on the activated list 2-3 weeks ago. There is no firm date for him to report yet.

Captain Biden is a Judge Advocate General in the 261st signal brigade of the Delaware National Guard.

Col. Gratteri was unsure of what kind of mission Biden would be doing, but said that his unit is preparing to deploy to Iraq.

WASHINGTON (CNN) - The White House has released this May 2006 photo of Jenna Bush and her fiancé, Henry Hager.

"Frankly, the President is acting like a spoiled teenager who crashes the family car and then hopes no one will notice. Well, Mr. President, we have noticed,” said the New Mexico governor. “My friends, it's time we take our future back.”

He added that the Bush tax cuts “have cost $1.1 trillion dollars, and resulted in the worst record of job creation since Herbert Hoover. In the 1980s, President Reagan liked to talk about the ‘welfare queen’ who bilked the government out of $8,000 dollars. Well, we've got welfare queens today - they're called Halliburton and Exxon/Mobil."

Richardson also outlined his own economic and education proposals, including his support of a balanced budget amendment to the Constitution, his “Apollo program” for renewable energy, bolstering math and science education, and various tax credits.

Edwards is currently on a bus tour of Iowa.

WASHINGTON (CNN) – Former North Carolina Sen. John Edwards does not take campaign contributions from federal lobbyists and now he’s trying to convince the rest of the Democratic Party to live by his example.

“With more than 60 lobbyists for every member of Congress, the voices of regular Americans are being drowned out in Washington,” Edwards said in the letter.

Obama campaign spokesman Bill Burton quickly responded, saying in a statement that it is not enough to refuse lobbyist money. Instead, “we have to curb their influence,” he said.

Pointing to Obama’s efforts to pass ethics legislation in the U.S. Senate, Burton also said that Sen. Obama “had done more to curb lobbyists’ influence than anyone else in this race.” Burton did not say whether Obama would join Edwards in asking the Democratic Party to turn down campaign contributions from federal lobbyists.

WASHINGTON (CNN) - CNN Senior Political Analyst Bill Schneider and CNN's John Lisk look at the latest poll on how voters feel about the war in Iraq and a report due out in September, in the latest Race to '08 podcast. 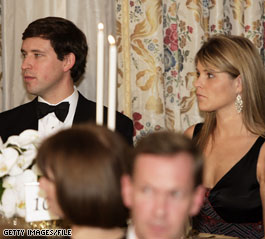 Jenna Bush, 25, is marrying Henry Hager, 28, a former White House aide who used to work with Karl Rove, and is a graduate of the University of Virginia School of Business, according to the Associated Press. Henry Hager’s father, John, is the chairman of the Virginia Republican Party, and the former lieutenant governor of Virginia.

The two met during the 2004 presidential campaign, but were not first spotted together until the president's inauguration in 2005, according to Style Magazine.

The first lady's office tells CNN the proposal occurred last night. The two are currently vacationing together in Maine.

No word if Hager asked the president for permission before the proposal.

No wedding date has been set.

Gen. Petraeus will report to Congress in September.

WASHINGTON (CNN) - A majority of Americans don't trust the upcoming report by the Army's top commander in Iraq on the progress of the war and even if they did, it wouldn't change their mind, according to a new poll.

President Bush has frequently asked Congress - and the American people - to withhold judgment on his troop surge into Iraq until Gen. David Petraeus and Ambassador Ryan Crocker issue their progress report in September.

But according to a new CNN/Opinion Research Corporation poll released Thursday, 53 percent of people polled said they don't trust the military assessment of the situation without trying to make it sound better than it actually is. 43 percent said they do trust the general's report. (Read full poll results [PDF])

CNN Polling Director Keating Holland said he doesn't think the mistrust is directed at Petreaus as much as it is what he represents.

"It does seem to indicate that anyone associated with the Bush administration may be a less than credible messenger for the message that there is progress being made in Iraq," Holland said. END_OF_DOCUMENT_TOKEN_TO_BE_REPLACED

Clinton happy to give Rove 'heartburn'

Clinton said she feels 'lucky' to give Rove 'heartburn.'

“I feel so lucky that I am now giving them such heartburn,” Clinton said Wednesday while campaigning in Iowa.

Clinton was referring to Rove's recent assertion on Rush Limbaugh's radio show that the New York senator was "fatally flawed," and would lose a general election match up because her negative favorability ratings are too high.

"She is going into the general election, depending on what poll you look at, with high 40s on the negative side and just below that on the positive side. There is nobody who has ever won the presidency who has started out in that position," said Rove, who is often referred to as "Bush's brain".

Obama has repeatedly made the argument he can unite the country better the Clinton can. He told the Washington Post Tuesday, "I think it is fair to say that I believe I can bring the country together more effectively than [Clinton] can."

Giuliani launched two new radio ads in South Carolina, a key early primary states in the 2008 presidential race. In an ad called “Fence,” Giuliani reflects on his difficulty in getting criminals who were illegal immigrants deported by the federal government. (Related: Watch Bill Schneider report on Giuliani v. Romney on immigration)

“It frustrates me that if someone comes here illegally, in addition to everything else that’s involved in that, if they commit a crime, we don’t throw them out of the country,” he said in the spot.

Giuliani adds, “People that come in illegally we gotta stop. You stop illegal immigration by building a fence, a physical fence and then a technological fence. You then hire enough Border Patrol so they can respond in a timely way.” The ad ends with Giuliani saying that fluency in English ought to be a requirement of becoming a U.S. citizen.

The second new radio ad, called “Out of Control,” focuses on how Giuliani’s record on crime, welfare, and spending as New York mayor.