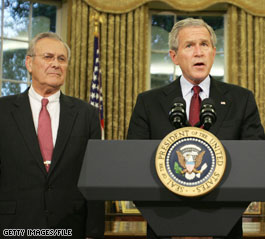 The letter is actually dated November 6, 2006 - the day before the midterm elections - even though the resignation was not announced until November 8.

President Bush has previously acknowledged the decision for Rumseld to leave was made before the midterm elections.

"The reason why [Rumsfeld didn't resign before Tuesday] is I didn't want to inject a major decision about this war in the final days of a campaign," Bush said the day of the resignation announcement.

The word "Iraq" does not appear anywhere in the letter.