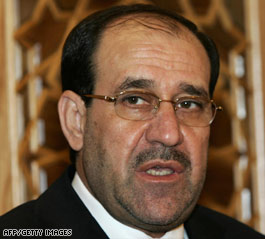 CRAWFORD, Texas (CNN) - A powerhouse Republican lobbying firm with close ties to the White House has begun a public campaign to undermine the government of Iraqi Prime Minister Nuri al-Maliki, CNN has confirmed.

This comes as President Bush is publicly taking great pains to reiterate his support for the embattled Iraqi leader, whose government has come under sharp criticism and scrutiny from Washington lawmakers and officials and Thursday's National Intelligence Estimate.

A senior Bush administration official told CNN the White House is aware of the lobbying campaign by Barbour Griffith & Rogers because the firm is "blasting e-mails all over town" criticizing al-Maliki and promoting the firm's client, former interim Iraqi Prime Minister Ayad Allawi, as an alternative to the current Iraqi leader.

But the administration official insisted that White House officials are not privately involved or blessing the lobbying campaign to undermine al-Maliki. (TIME.com: Few good alternatives to al-Maliki)

Ingrid Henick, a vice president for Barbour Griffith & Rogers, confirmed to CNN the firm has signed a contract to "provide strategic counsel for and on behalf of Dr. Allawi."

Henick refused to comment on why such a prominent Republican firm would work to hurt al-Maliki, whom President Bush has repeatedly backed as the best hope for forging political reconciliation in Iraq.

When asked whether the White House will call the prominent Republican lobbying firm to stop lashing out at al-Maliki, the senior administration official said "I don't rule it out" because of the President's support for the prime minister.

Pressed on why allies of the White House would be contradicting the president so publicly, the senior administration official said of the lobbyists, "They're making a lot of money."

According to an e-mail obtained by CNN, Barbour Griffith & Rogers sent a mass message Tuesday to congressional staffers with the subject line, "A New Leader in Iraq," promoting Allawi as a potential successor to al-Maliki.

"Please see today's news items regarding the increased skepticism of the Maliki government in The New York Times (embedded), The Washington Post and The Wall Street Journal (attached), along with a joint statement made by Senators Carl Levin and John Warner," said the e-mail obtained by CNN.

A second e-mail from the lobbying firm sent congressional staffers a copy of a recent Washington Post op-ed by Allawi that said Iraq will fall apart unless al-Maliki is forced out of power.

The outlines of the lobbying campaign were first reported by the news blog, Iraqslogger.com.

The lobbying e-mails were sent Tuesday, the day after Levin called for the ouster of al-Maliki upon return from an official trip to Iraq with Warner. Also on Tuesday, President Bush appeared to be softening his support for al-Maliki at a press conference by expressing frustration with the pace of progress by the Iraqi government.

But on Wednesday, upset by media reports asserting he was backing away from the Iraqi leader, Mr. Bush clarified in a speech, "Prime Minister Maliki is a good guy, a good man with a difficult job, and I support him."

The e-mails to congressional staffers directly came from Allawi himself from the e-mail address "DrAyadAllawi@Allawi-for-Iraq.com."

But the bottom of the e-mail added this note of disclosure to congressional aides: "Barbour Griffith & Rogers, LLC has filed registration statements under the Foreign Agents Registration Act with regard to its representation and dissemination of information on behalf of Dr. Ayad Allawi."

But she would not provide details of the filing, which will reveal how much money the firm is making on the account and other details, because the Justice Department has not yet made the documents public.

Henick added that beyond the e-mails, the firm will also be directly lobbying members of the "U.S. government, Congress, the media and opinion leaders" on behalf of Allawi.

One Republican congressional aide who received the e-mails this week expressed surprise that a lobbying firm with such close ties to the White House would attack al-Maliki at such a pivotal time on the debate over the war, just weeks before the President provides a progress report to the nation.

The lobbying firm was founded by conservative stalwarts Haley Barbour, the former Republican National Committee Chairman and current governor of Mississippi; Lanny Griffith, who worked for the administration of former President George H.W. Bush; and Ed Rogers, an aide to former Presidents Reagan and Bush.

But the current Bush administration official dismissed the effort, noting there's a "lot of lobbying" on various issues and the campaign against al-Maliki is just a "bunch of noise in Washington, D.C."