BOISE, Idaho (CNN) - With the man who will appoint his successor standing behind him, Republican Sen. Larry Craig of Idaho said Saturday he will leave Congress where he has served for nearly three decades.

"It is with sadness and deep regret that I announce that it is my intent to resign from the Senate effective September 30th. In doing so ... I hope to allow a smooth and orderly transition of my loyal staff and for the person appointed to take my place," Craig said in a brief statement.

A cheer went up in the crowd after he said he would resign, but there also were political supporters and family members nearby.

He acknowledged several political leaders at the news conference, including Idaho Gov. C.L. "Butch" Otter, a Republican, who will appoint an interim replacement for Craig who will serve until the 2008 election.

"To have the governor standing behind me as he always has, his tremendous strength for me .... is tremendously humbling," Craig said. "For any public official at this moment in time to be standing with Larry Craig is, in itself, a humbling experience."

END_OF_DOCUMENT_TOKEN_TO_BE_REPLACED

Rove chokes up on last day

Karl Rove waved to staffers as he left the White House on Friday, his last day on President Bush's staff

At the closed-door senior staff meeting at 7:30 a.m. in the Roosevelt Room, Rove was surprised with a slide show of photos chronicling his nearly seven years at President Bush's side, through good times and bad.

White House Press Secretary Tony Snow told CNN that Rove was so touched by the tribute that he didn't have any final words for his colleagues. "He was pretty choked up," Snow said.

BOISE, Idaho (CNN) - A Republican source in Idaho tells CNN's Dana Bash that Senator Larry Craig will announce his resignation at Saturday’s news conference, and the resignation will be effective September 30.

If Craig quits, what's next? 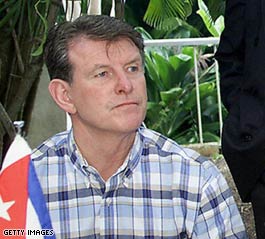 Idaho Gov. C.L. "Butch" Otter would have to name a replacement for Sen. Craig

WASHINGTON (CNN) - Idaho’s Republican governor, C.L. "Butch" Otter, would name an interim replacement to serve until next year’s election. Otter would most certainly name a Republican, and that person would most likely have a major edge in the 2008 contest.

And here’s why: Idaho is a very red state. As mentioned, the governor is a Republican, as is Craig and the other U.S. senator, Mike Crapo. Both U.S. representatives are Republican, and President Bush cruised to victory in Idaho in 2004, winning 69% of the vote.

A number of Idaho Republicans are said to be interested in running for Craig’s seat, including Rep. Mike Simpson. Current Lt. Gov. James Risch and former Governor and Interior Secretary Dirk Kempthorne are other possibilities.

The leading Democratic challenger at this point appears to be former Congressman Larry LaRocco, who’s already actively campaigning, but has only raised around $80,000.

"We should have the courage and conviction to speak out against this decision. The people of Iowa reject the redefinition of marriage, and I pledge to defend the bond of marriage, as I have consistently done in the past," the GOP presidential hopeful from Kansas said in a statement Friday. "This decision shows how important it is to elect leaders who will stand for marriage and who will appoint judges that will not legislate from the bench. We need to rebuild the family and renew the culture, not redefine marriage."

On Thursday, a Polk County judge in Iowa temporarily cleared the way for same-sex couples across the state to apply for marriage licenses in Polk County. He ruled that Iowa's 1998 Defense of Marriage Act, which allowed marriage only between a man and a woman, violated the constitutional rights of due process and equal protection of six gay couples who had sued.

On Friday, the county recorder stopped accepting marriage applications after the judge stayed his ruling pending a county appeal of the ruling to the Iowa Supreme Court. 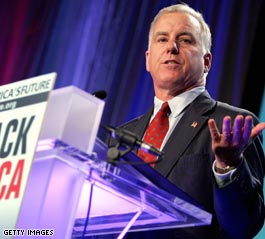 WASHINGTON (CNN) - The chairman of the Democratic National Committee has sent a message to the field of 2008 Democratic presidential candidates: follow the rules.

In a letter sent to candidates Friday, Gov. Howard Dean called on his party’s White House hopefuls to support a DNC decision to strip the state of Florida of its say in the nomination process if it proceeds with plans to hold its presidential primary on January 29, eight days earlier than party rules allow.

The DNC’s Rules and Bylaws Committee ruled in a meeting in Washington last Saturday that Florida Democrats would lose all of their delegates to the 2008 Democratic National Convention in Denver unless they modified their primary plans within 30 days.

"My goal as chairman, and our objective as a party, is to structure a nominating process that adheres to rules that are clear, straightforward and published. The vast majority of states have complied with these rules," wrote Dean. "As leader of the Democratic Party, I strongly urge you to adhere to the 2008 Delegate Selection Rules."

Dean went on to describe Florida’s current plan for a January 29 primary and defended the committee’s need to maintain the party’s presidential nomination rules. I strongly urge you to do your part and support the actions of the Rules and Bylaws Committee. The RBC did one thing on Saturday: enforce the Party’s rules," he said in closing.