The surgical procedure, called a posterior cervical foraminotomy, was described as minimally invasive.

The White House statement did not say where or when the first lady will undergo the procedure.

President Bush is in Australia for the APEC summit. 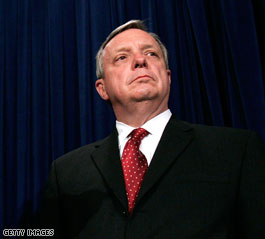 WASHINGTON (CNN) - Days before Gen. David Petraeus testifies before Congress on the progress of the troop "surge" in Iraq, the Senate's number two Democrat is accusing the administration of manipulating information in its highly anticipated Iraq report that will be released next week.

"By carefully manipulating the statistics, the Bush-Petraeus report will try to persuade us that violence in Iraq is decreasing and thus the surge is working," Sen. Dick Durbin of Illinois said at a Washington think tank.

Durbin, a war critic, said that for a long period of time he has exchanged e-mail with civilian employees who were gathering data for the report and writing draft portions of the findings.

"Some of them I correspond with almost on a daily basis. And when they sent a discouraging report about things that were happening in Baghdad, they were reminded by their superiors that's unacceptable; we need a positive report. They were sent back for editing changes. Now that's a fact," Durbin said.

Petraeus is expected to testify next week that the troop buildup has produced progress on the ground.

END_OF_DOCUMENT_TOKEN_TO_BE_REPLACED

WASHINGTON (CNN) - Mike Huckabee had a surprisingly strong showing in the Iowa straw poll last month and Fred Thompson finds himself second in most national polls, but according to rival Mitt Romney, it's all about the money.

The former Massachusetts governor told the Associated Press Friday the two Republican White House hopefuls each need to raise $20 million this quarter to be considered a first-tier candidate.

"If Huckabee raises $20 million this quarter, like we did in the [first] quarter, then he'll become a front-tier candidate," Romney said. "And I think from Thompson's standpoint, I think he certainly has to look at $20 million as sort of the - this is, if you will, the low hanging-fruit quarter for him."

Huckabee, the former governor of Arkansas, had raised $1.3 million for his presidential bid by the end of June, according to the latest FEC filing. Thompson, a former Tennessee senator who officially jumped in the race Thursday raised $3.4 million in the month of June.

Meanwhile, Romney has raised approximately $35 million so far this campaign season and has loaned himself an additional $8 million.

WASHINGTON (CNN) - President Bush will "very likely" speak to the nation about the latest developments and conditions in Iraq during a prime time address next week, a senior administration official tells CNN’s Ed Henry.

An exact date and location for the speech have not been chosen yet.

According to the official, the speech will summarize the findings of Gen. David Petraeus and Ambassador Ryan Crocker's report, and attempt to re-frame the larger debate as Congress prepares to vote on timetables to withdraw U.S. troops from the country.

WASHINGTON (CNN) – After months of being guarded about his political future, Sen. Chuck Hagel will announce Monday whether he will retire from the Senate or seek a third term. The Nebraska senator has also refused to rule out a run for the Republican presidential nomination.

This will all be put to rest at 11 a.m. ET when Hagel discloses his decision at a news conference held at the Omaha Press Club.

Hagel, a decorated Vietnam War veteran, was first elected in 1996.

The Rothenberg Political Report describes Hagel as having a “Clear Advantage” if he chooses to seek re-election. But if Hagel decides to run, he will be opposed in the primary by Nebraska Attorney General Jon Bruning.

The state attorney general formally announced in June that he would challenge Hagel for the GOP Senate nomination. Meanwhile, Democrats are actively recruiting former Sen. Bob Kerrey to run for the seat. Kerrey retired in 2000 and is currently the president of The New School in New York City.

Mrs. Obama gets personal about Barack 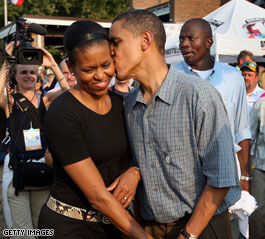 Barack and Michelle Obama at the Iowa fair last month.

WASHINGTON (CNN) - Americans historically like to know personal details about their presidential candidates, but the latest insight into Sen. Barack Obama from his wife Michelle may be a bit more insight than needed.

In an interview with Glamour Magazine, Mrs. Obama details her two girls' morning ritual, a time, she says, when her husband Barack is often "snore-y and stinky."

“We have this ritual in the morning," Michelle Obama told Glamour. "They come in my bed, and Dad isn’t there — because he’s too snore-y and stinky, they don’t want to ever get into bed with him."

"But we cuddle up and we talk about everything from what is a period to the big topic of when we get a dog: what kind?” she added.

Michelle Obama often discusses more intimate details about her husband on the campaign trail - even her annoyances with the Illinois Democrat.

"There's the Barack Obama who lives in my house," she said when introducing her husband earlier this year. "That guy's not as impressive. He still has trouble ... putting his socks actually in the dirty clothes, and he still doesn't do a better job than our 5-year-old daughter Sasha at making his bed, so you'll have to forgive me if I'm a little stunned at this whole Barack Obama thing."

Though some have criticized her for expressing such gripes, Mrs. Obama defended the practice to Glamour.

"People have notions of what a wife’s role should be in this process, and it’s been a traditional one of blind adoration. My model is a little different—I think most real marriages are," she said.

Despite working in the Clinton administration, Peña decided to back Obama over his former boss’ wife, Sen. Hillary Clinton.

“I have spent years working with presidential administrations and world leaders, and what I see in Barack Obama is the kind of judgment this country needs to usher in a new era of global leadership," Peña said in a statement. "The challenges we are facing in Colorado, in the Hispanic community and across the country are formidable and it is time for bold and thoughtful leadership in the White House.”

“I look forward to working with Federico to bring about the transformation this country desperately needs," Obama said in a statement. "His vision for change as mayor of Denver and his strong record on energy and transportation issues brings invaluable experience to our team."

Giuliani defines the war on terror

Giuliani wants to redefine the war on terror, he said Friday.

WASHINGTON (CNN) – Former New York City Mayor Rudy Giuliani said that the current “War on Terror” should be called the “Islamic Terrorist War on Us” at an event Friday in Florida commemorating victims killed in the Sept. 11 terrorist attacks.

Giuliani went on to say that the country has had problems recognizing threats.

Related video: CNN's Bill Schneider looks at the politics of the war on terror.

"Today, terrorism is worse in Iraq, and it’s worse around the world," Edwards said in a speech at Pace University, four days before the six-year anniversary of the 9/11 attacks. "So what does all this mean? It means the results are in on George Bush’s so-called 'global war on terror,' and it’s not just a failure. It’s a double-edged failure."

The former North Carolina senator also charged the Bush administration has "rigidly stuck to outdated approaches that are ineffective against the modern terrorist threat," and proposed a new multilateral organization that will seek to "create connections between a wide range of nations on terrorism and intelligence."

Edwards said countries from every continent would be part of the organization and would be "required to commit to tough criteria about the steps they will take to root out extremists, particularly those who cross our borders."

In April, Edwards indicated during a presidential debate that he did not believe there was a “global war on terror” and later declared the term "a bumper sticker, not a plan."

Related video: CNN's Bill Schneider takes a look at the politics of the war on terror

President Bush will give his progress report on Iraq next week, based on information from Gen. David Petraeus.

WASHINGTON (CNN) - When President Bush made a surprise visit to Iraq last weekend, he made clear he was pleased with what he saw.

"The security situation is changing," Bush told reporters during the visit. "There's more work to be done. But reconciliation is taking place."

But according to the Sydney Morning Herald of Australia, the president gave a more-to-the-point assessment to Australia Deputy Prime Minister Mark Vaile.

"We're kicking ass," Bush said to Vaile Tuesday, according the Herald, after the deputy prime minister inquired about his trip to Iraq.

This isn't the first blunt comment Bush was overheard making to a world leader. At last year's G8 summit, a live microphone picked up the president telling then-British Prime Minister Tony Blair that the United Nations needs to "get Syria to get Hezbollah to stop doing this s**t."