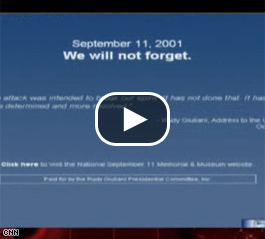 On the sixth anniversary of the September 11 attacks, former New York City Mayor Rudy Giuliani replaced his normal campaign Web site with a much simpler tribute.

Watch CNN's Abbi Tatton report on how some of the 2008 presidential candidates chose to remember the September 11, 2001 terrorist attacks on their campaign websites.