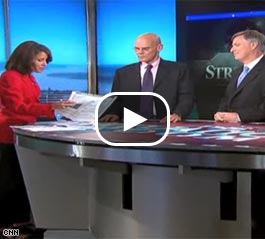 The top political issues of the day are debated every weekday evening during Strategy Session in CNN's Situation Room.

WASHINGTON (CNN) - The debate gets heated in a special edition of the Situation Room's "Strategy Session." Watch James Carville, Democratic strategist and CNN contributor, and Terry Jeffrey, Editor-at-Large of Human Events, as they spar over the liberal advocacy group MoveOn.org, the political ad wars, and the war in Iraq.

Related: MoveOn.org moves from 'betray us' to 'betrayal' ad

McCain urges voters to support the troops and mission

LONDONDERRY, New Hampshire (CNN) - Sen. John McCain's, R-Arizona, last visit on his New Hampshire "No Surrender" tour culminated with his fervent message that defeat in Iraq was not an option.

"I believe we can and we must and we will prevail," the presidential hopeful said before a crowd of New Hampshire war veterans and supporters Friday.

Sen. McCain, a Vietnam War veteran and former prisoner of war, has been criticized for his steadfast support for the Iraq war. Yet his campaign gained traction this week following Gen. David Petraeus’ testimony on the success of the Iraqi troop surge.

"I think we have to understand that frustration is bred by the failure of almost four years. Now we have a winning strategy. We can and must succeed," McCain said.

Sporting a Naval Academy baseball hat, Sen. McCain, who has two sons in uniform, implored the audience to continue to support the troops as well as their mission. "It's wonderful to say I support the troops. It's not really so wonderful if they're going to be defeated."

He added that withdrawal from Iraq would lead to "greater sacrifice of American blood and treasure" and urged the crowd to not allow the sacrifices of those serving "to be in vain."

What's next for Iraq? 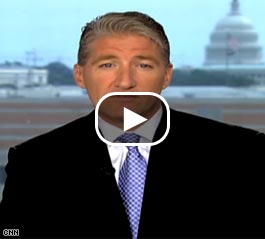 WASHINGTON (CNN) - President Bush's speech Thursday about the future of U.S. military operations in Iraq may have changed the debate about how much longer American troops will stay. Watch CNN's Chief National Correspondent John King report on where things stand between President Bush and Congress when it comes to Iraq.

Friday was the embattled Attorney General's last day at the helm of the Justice Department.

WASHINGTON (CNN) - Attorney General Alberto Gonzales received an emotional and staunchly supportive send-off in the final hour of his last day on the job at the Justice Department on Friday.

With a handful of protesters noisily celebrating his departure on the sidewalks outside, Gonzales was praised by no fewer than 10 Justice lieutenants and agency heads - some with their voices cracking.

Gonzales himself at one point wiped tears from his eyes and praised the Justice Department as "a place of inspiration" in his farewell speech.

But he also expressed concern about challenges ahead, noting his day had begun - as always - with an intelligence briefing.

"As I depart, I wish - I wish that I can tell you that work is done. That there are no threats, but I cannot. Our enemy is resourceful and determined, and I will wonder and worry when I'm gone what is being said in those briefings," Gonzales said.

Giuliani has led South Carolina polls for months, while McCain is running third.

COLUMBIA, South Carolina (CNN) — When Beaufort, South Carolina Mayor Bill Rauch was press secretary and adviser to former New York City Mayor Ed Koch in the 1980s, he didn't think 20-plus years later he would end up running a small coastal town about 40 miles from the Georgia border.

Now, as a small town mayor and supporter of Sen. John McCain in a state that will help determine the Republican presidential nomination, Rauch has a minor voice in politics here. And like his former boss Koch, he still doesn't like Giuliani very much.

"I know Giuliani will fold up like a dove who got hit with buckshot in a dove hunt," Rauch said in a phone interview. "I don't worry about Giuliani at all in terms of winning. He's not going to win."

END_OF_DOCUMENT_TOKEN_TO_BE_REPLACED

Michelle Obama: It's not about 'whose turn it is'

(CNN) - Michelle Obama has a message for women voters: Don't cast your vote in 2008 based on "whose turn it is."

“We are working hard to ensure to the women of America that Barack Obama is who we need," Ms. Obama said of her husband on CBS's "The Early Show" Friday.

"You know, some women just feel like, that it's a woman's turn," she added, regarding Democratic frontrunner Hillary Clinton." And people have said….that they just feel like, you know, it's Hillary's turn. That, I reject because democracy isn't supposed to be about whose turn it is."

Her comment is the latest from the spouse of a Democratic candidate directed at Clinton and other top rivals. In a Salon interview in July, Elizabeth Edwards said her husband John Edwards would be a better choice for women voters.

“[Clinton] is just not as vocal a women’s advocate as I want to see. John is,” she said.

Mrs. Edwards, in an interview with Ziff Davis Media published last month, also said, “We can't make John black, we can't make him a woman. Those things get you a certain amount of fundraising dollars."

Richardson, who attended high school and college in the Boston area, is a fan of Boston's sports teams.

WASHINGTON (CNN) - At first blush it's not particularly easy to connect the New England Patriots' spying flap to President Bush, but Democratic presidential hopeful Bill Richardson found a way to do it Friday.

"The president has been allowed to spy on Americans without a warrant, and our U.S. Senate is letting it continue," said the New Mexico governor in a statement. "You know something is wrong when the New England Patriots face stiffer penalties for spying on innocent Americans than Dick Cheney and George Bush."

Richardson attended high school and college in the Boston area.

After the NFL determined the Patriots secretly videotaped the New York Jets' defensive signals during last week’s game, Commissioner Roger Goodell fined head coach Bill Belichick $500,000 and the Patriot's organization $250,000. The Patriots will also have to give up next year's first-round draft choice if they reach the playoffs. They will forfeit their second and third round draft picks if they do not reach the postseason.

Can McCain weather the political storm in South Carolina?

Arizona Sen. John McCain gets off his "No Surrender" bus at a campaign stop in Waterloo, Iowa, Wednesday.

COLUMBIA, South Carolina (CNN) - In the summer of 2006, when Sen. John McCain was the early front-runner for the Republican presidential nomination, he began assembling what was supposed to be an unparalleled political organization in South Carolina.

The Arizona senator got an early jump on the endorsement game, locking up scores of supporters, from statehouse leaders on down to mayors and county GOP chairmen.

He also began signing up many of President Bush's supporters from 2000 - the very same people who worked forcefully to halt McCain's New Hampshire primary momentum and put an end to his presidential bid in this state.

One year and one massive campaign shake-up later, there are whispers in the state capital that some of those backers have considered abandoning McCain, perhaps to sign up with former Tennessee Sen. Fred Thompson or even former Arkansas Gov. Mike Huckabee.

"South Carolinians like presidential candidates who build support among elected officials," said Tucker Eskew, who helped engineer Bush's South Carolina primary victory in 2000, but is not affiliated with a candidate in the 2008 campaign. "But they show interest in winners, too. They want a connected winner."

McCain's endorsements - more than 250 of them, according to a campaign spreadsheet - are still there. But whether they are solid or soft is an open-ended question.

MoveOn.org moves from 'betray us' to 'betrayal' ad

The target of a political firestorm this week for its NY Times ad, MoveOn.org is launching a new TV ad next week.

WASHINGTON (CNN) - Five days after MoveOn.org set off a political firestorm by publishing an ad in the New York Times attacking the top U.S. commander in Iraq, Gen. David Petraeus, the liberal advocacy group has set its sights on President Bush.

The organization announced Friday it is rolling out a new national television ad campaign next week accusing Bush of "a betrayal of trust."

"Before the surge, George Bush had 130,000 troops stuck in Iraq," states the ad's narrator. "Americans had elected a new Congress to bring them home. Instead, Bush sent 30,000 more troops. "

"[President Bush has] given us a sham draw-down plan — 30,000 troops by next July is not a plan to end the war," Nita Chaudhary, a spokeswoman for the organization said in a statement. "No one is fooled by this. It’s just a political scheme to provide cover for Republicans and run out the clock to the end of his term."

Absent from the television spot is Petraeus, who was accused by MoveOn in its now infamous "Petraeus or Betray us" New York Times ad of not being truthful in his Iraq report for political reasons.

The Times ad claimed Patraeus "will not admit what everyone knows: Iraq is mired in an unwinnable religious civil war." It also suggested that Petraeus' testimony was influenced by the White House.

Eli Pariser, executive director of MoveOn.org, told CNN the group wanted to move past Petraeus in the TV ad campaign and "remind people about the president's role in this as well."

And despite condemnation from members of both parties over the ad in the New York Times, Pariser says he has no regrets the organization placed it, saying, "We're happy it caused people to take a close look at the statistics."

Four Iowa lawmakers to back Obama

"[Obama] used his good judgment to speak out against the war in Iraq before it was popular to do so," Miller said in a statement released by the campaign.