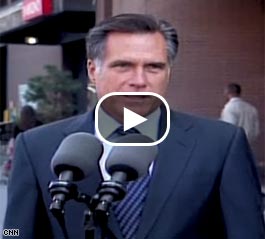 “You’ll see that version 2.0 is not likely to have any more success than 1.0,” said Romney, referring to Sen. Clinton’s first attempt to reform the healthcare system in 1993. “'Hillary Care’ continues to be bad medicine.”

Romney, who implemented comprehensive healthcare reform during his term as governor of Massachusetts, said Clinton’s plan relied too much on the federal government and not enough on states or the private market.

“In her plan, it's crafted by Washington; it should be crafted by the states. In her plan, we have government Washington managed health care. Instead, we should rely on the private markets to guide health care,” Romney said during a press conference.

Like the plan passed in Massachusetts during Romney's time in office, Clinton's plan would require individuals to have some form of health care insurance.

But Romney emphatically said the plan implement in Massachusetts was “entirely different” from Sen. Clinton’s.