Richardson proposed a plan that would allow seniors to get health care at home.

DAVENPORT, Iowa (CNN) - Democratic presidential candidate Bill Richardson proposed a "house calls" medical plan Thursday that would allow senior citizens to get health care at home they now can only get at the hospital.

The New Mexico governor unveiled the plan, called "Independence at Home," at the Divided We Fail/AARP/Iowa Public Television presidential candidate forum on health and financial security. He said it could save $13 to $16 billion a year by reducing emergency room visits and hospital admissions.

"Through electronic technology, they can get their care at home," Richardson said. "They can do it instead of having 13 doctors and having to go to the hospital the healthcare would come to them at home."

Richardson spokesman Tom Reynolds said the program would be entirely voluntary and would fall under Medicare, at no additional cost to the system.

Clinton: 'My mother lives with us'

DAVENPORT, Iowa (CNN) - Hillary Clinton responded to a plan that Democratic rival Bill Richardson announced would bring health care directly to people in their homes–as opposed to forcing them to go to a hospital–by talking about her own mother.

"This is an issue that affects all of us," Clinton said. "My mother lives with us, as well, and we see it every single day."

Clinton press secretary Jay Carson said the candidate's mother has lived with the Clintons for "at least a couple of years" but that she¹s "as able and capable as they are."

"She just lives with them," Carson said.

Clinton made the comments at the Divided We Fail/AARP/Iowa Public Television presidential candidate forum on health and financial security.

She called for long-term care tax credit for people providing respite care. She said if the United States were to lose all it's caregivers, it would mean "a $300 billion cost to replace what is done out of love and out of family and other relationships."

Is Ellen DeGeneres the Wolf Blitzer of daytime T.V.? 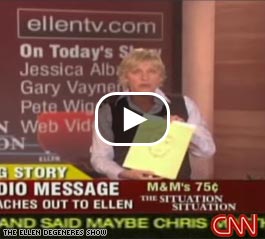 WASHINGTON (CNN) - What's the situation between CNN's Wolf Blitzer and Ellen DeGeneres?  Watch this clip and find out.

Giuliani takes to the world stage 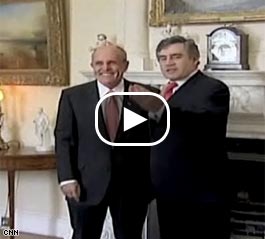 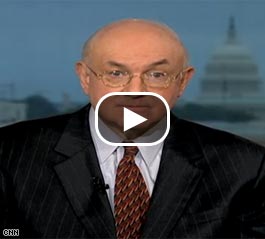 Watch Bill Schneider's report on 2008 presidential candidates who have bowed out of some debates.

WASHINGTON (CNN) - The first votes for the Democratic and Republican presidential nominations won't be cast for months but already some 2008 candidates for the White House are choosing to skip some debates.  Bill Schneider has the story.

(CNN)—Democratic presidential candidate, Senator Barack Obama said Thursday, "I happen to believe that General (David) Petraeus has served this country honorably." But he also said he did not cast a vote in the Senate on Thursday condemning an ad from MoveOn.org that attacked Petraeus, because he thought it was a distraction.

Speaking at a campaign rally in Atlanta, Georgia, Obama said the Congress could better spend its time figuring out ways to care for returning veterans, and making education more affordable for American families. "The notion that we're wasting time debating about a newspaper ad, makes no sense," the senator from Illinois said. "So I didn't even vote on that vote, I just said I'm not going to vote on this. This is the kind of game playing that the American people are tired of."

Twenty Democrats in the Senate joined the Republicans in the 72-25 vote that officially repudiates the group's ad. Sen. Joe Lieberman, an Independent from Connecticut, also voted for the measure, sponsored by Texas Republican John Cornyn.

Senator Hillary Clinton of New York, also a candidate for the Democratic nomination, voted against the measure. She has been criticized by several Republican presidential candidates for not distancing herself from the ad.

Obama was introduced by former NBA star Dominique Wilkins, and the musician Usher at his rally Thursday. 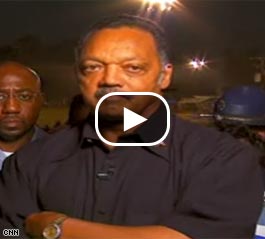 "There's an unfortunate misinterpretation," Jackson told CNN's Kiran Chetry on American Morning. "The fact is, I endorse Barack without hesitation and support him today unequivocally."

Jackson, who ran for president in 1984 and 1988, endorsed Obama’s White House bid earlier this year.

The State, a South Carolina newspaper, reported Wednesday that Jackson was highly critical of Obama and the other presidential candidates for not paying more attention to the recent racially-charged incident in Jena, Louisiana. Jackson reportedly made the comment after a speech at Benedict College, a historically black college in Columbia.

When informed the newspaper intends to stand by its reporting of the quote, Jackson said, "I have not in any way engaged into the degrees of blackness debate. He's black, authentic and brilliant. I support him and I stand by that position."

WASHINGTON (CNN) - Senate Majority Leader Harry Reid said Thursday that Democrats are disappointed that they have been unable to force President Bush to change course in Iraq, but vowed to keep pushing with or without Republican help.

GOP senators have successfully filibustered every Democratic-led push to bring troops home from Iraq, using a procedural vote Wednesday to kill a proposal that would have required the Pentagon to give troops returning from Iraq stateside time equal to their time in the combat zone.

Though six Republicans joined Democrats in voting for the plan, the final vote was four short of the 60 needed to break a filibuster.

And by a wide margin Thursday, senators killed a proposal by Wisconsin Democrat Russ Feingold to cut off money for the war. The vote was 70-28.

END_OF_DOCUMENT_TOKEN_TO_BE_REPLACED

In an interview with CNN before attending a rally here for protestors on behalf of six African-American students in Jena, Louisiana, Mrs. Edwards accused Clinton of "insider cronyism" and trading political access for campaign donations. This comes on the heels of similar sentiments put forth by her husband in recent weeks.

"You can have a meeting with a member of Congress if you donate to Hillary's campaign," said Mrs. Edwards. "What this is saying is she's willing to sell special access to the government if you just have the check. Isn't that just exactly what John is saying we shouldn't be doing?"

Mrs. Edwards also said that she sees almost no differences between Clinton's health care plan, unveiled Monday in Des Moines, and that of her husband.

"I just have to wonder, if John released his plan at the beginning of February, what took her seven and a half months to endorse it? We're glad for the endorsement."

END_OF_DOCUMENT_TOKEN_TO_BE_REPLACED

Kucinich, Gravel: We were snubbed - again 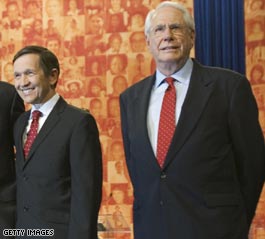 Kucinich and Gravel were not invited to two big Iowa events this week.

DES MOINES, Iowa (CNN) - For the second time in one week, Democratic presidential candidates Rep. Dennis Kucinich, D-Ohio, and former Alaska Sen. Mike Gravel will be absent from an Iowa stage on which the majority of their opponents will be standing.

Thursday night marks the Divided We Fail/AARP/Iowa Public Television presidential candidate forum on health and financial security. It also marks the second time this week that an event or organization has not exactly welcomed these two candidates with open arms.

Spokespeople from both Sunday's and Thursday's events say the two candidates would have been allowed to schmooze and hold hands with the rest of the pack had they met the criteria–a stronger physical presence in Iowa.

Mark Fetterhoff, a spokesperson with the AARP Divided We Fail initiative, said every candidate was invited, but there were two stipulations for Thursday's forum that neither candidate met by the deadline: a physical campaign office in Iowa and at least one paid campaign staff representative performing full-time duties in the stateon behalf of the candidate since at least August 1, 2007.