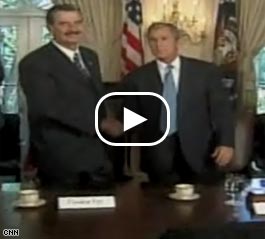 Were Fox and Bush really amigos?

(CNN) - The 2008 White House hopefuls are looking for votes from Americans living overseas.  John King reports from London on the overseas campaign to win the White House in 2008. 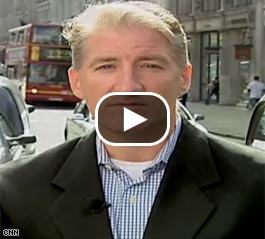 The race for the White House in 2008 extends beyond U.S. shores.

Romney to Republicans: Get 'house in order'

Romney has some sharp words for Republicans in an "open letter" to his party.

WASHINGTON (CNN) - Following the release of a television ad earlier this week that criticizes his own party, former Massachusetts Gov. Mitt Romney has released "an open" letter to his "friends and fellow Republicans" calling on them to "start acting like Republicans."

“The blame, we must admit, does not belong to just one party," he writes in the letter set to be published in the New Hampshire Union-Leader this Sunday and the Capitol Hill paper Roll Call this Monday.

"If we’re going to change Washington, Republicans have to put our own house in order," Romney continues. "We can’t be like Democrats – a party of big spending. We can’t pretend our borders are secure from illegal immigration. We can’t have ethical standards that are a punch-line for Jay Leno. When Republicans act like Democrats, America loses."

The letter will also be circulated among Republican National Committee members and supporters of the campaign, Romney spokesman Kevin Madden said.

DES MOINES, Iowa (CNN) - Speaking with reporters after outlining his plan for education reform, former North Carolina Sen. John Edwards said his proposal would cost an estimated $7 billion the first year and would "escalate over time."

The Democratic presidential candidate said the funding would come from taxes that are not currently being collected, particularly capital gains taxes because "brokerage houses are not reporting capital gains."

A significant portion of Edwards' education plan includes provisions to overhaul "No Child Left Behind," but when asked why he is criticizing NCLB now after having voted for it back in 2001 as a sitting senator, Edwards told CNN said that NCLB was a good concept, but that President Bush has "failed to fund it." He also questioned the effectiveness of the law's testing requirements.

"My nine year old Emma Claire finished third grade in public school this past year," he said. "She spent half a year preparing for the integrated test ... She had a terrific teacher, but it was clearly intrusive into the learning process."

In addition to NCLB reform, Edwards is also calling for universal preschool for four-year-olds, increasing teacher pay, and creating a national teacher university. 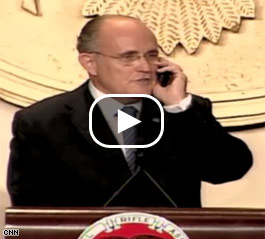 Watch Giuliani take a call from his wife during a speech to the NRA. Was it real or staged? You decide.

WASHINGTON (CNN) - When former New York City Mayor Rudy Giuliani gets a call from his wife Judith he takes it, even if it happens in the middle of a speech to hundreds of people.

The New York Republican presidential hopeful was delivering a speech to the National Rifle Association Friday in Washington when his cell phone began to ring. He was in the middle of discussing the importance of the 2nd amendment.

"Let's see now, this is my wife calling, I think," he said as he answered the phone.

"Hello dear, I am talking to the members of the NRA right now, would you like to say hello?," he asked, as the crowd sat mostly silent.

She apparently did not.

"I love you and I will give you a call when I am finished, OK," he said, trying to wrap up the call. "Have a safe trip, talk to you later dear I love you."

The crowd quietly applauded after he ended the call and Giuliani joked, "It’s a lot better that way. This is one of the great blessings of the modern age, to be always available - maybe it isn't. I am not sure."

Was the call Friday real or staged? Giuliani received a similar call during a June 21 rally in Hialeah, Florida – telling the crowd it was his wife on the phone. The clip of that moment is posted on YouTube, and being noted by other campaigns.

The Giuliani campaign says the call was legitimate.

UPDATE: Wayne LaPierre, the executive vice president of the NRA, told CNN he thought the moment was "light hearted" and the crowd was "amused by it."

"I think we've all taken a lot of phone calls from our wives," LaPierre added.

Asked if he would take a call from his wife during a speech, Lapierre said, "I don't know that I would have it (the phone) in my pocket on."

McCain's speech to the NRA was interrupted by war protesters.

McCain seemed to address both the protestors and supporters of amendments offered by Senate Democrats this week that would have either cut funding for the war or called for a timetable for withdrawing troops in Iraq. All of the amendments either failed to get a majority or the 60 votes required by Senate rules to proceed in the face of a GOP filibuster.

The protesters were escorted out of the room after the disruption.

McCain was the first of four presidential candidate to address the NRA in person and the first to take a swipe at two GOP rivals.

END_OF_DOCUMENT_TOKEN_TO_BE_REPLACED

Bill Clinton on being No. 2: 'I may slit my throat' 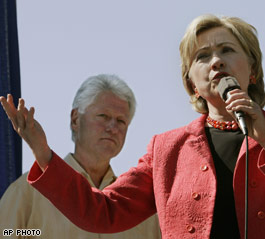 How is Bill Clinton adjusting to being No. 2?

WASHINGTON (CNN) - Former President Bill Clinton says it’s not going to be easy to adjust to a new role in the White House if his wife, New York Sen. Hillary Clinton, wins the presidency.

"I may slit my throat," the former president joked on Thursday night's The Daily Show when asked about the prospect of returning to the White House as anyone other than the President of the United States.

But Clinton quickly got back to being supportive saying, "My basic job will be to support her if she wins. I'll go and do what is most needed, and what is best for the country, and let her make that call."

The former president also praised the other Democratic presidential candidates.

"I like this field," he said. "I love having a field, as a Democrat, where I don't have to be against anybody."

WASHINGTON (CNN) - One day after the U.S. Senate unanimously approved a resolution condemning MoveOn.org’s “General Betray Us” ad and President Bush offered his own harsh condemnation of the group, the liberal advocacy organization said it is being flooded with messages of support from members of the U.S. military and their families.

And as of midnight on Thursday, MoveOn also said it had raised $500,000 from 12,000 individuals to support a new ad its running criticizing Republicans who blocked an effort to give U.S. troops more time between deployments to the Middle East.

“These folks have made sacrifices many of can’t imagine,” the organization stated in a news release. “Their charge to us was clear: keep speaking the truth about how President Bush and the Republicans have betrayed our trust.”

MoveOn has been a hot topic of conversation ever since it published an ad in The New York Times questioning the credibility of Gen. David Petraeus, the top U.S. commander in Iraq.

Edwards will lay out his education plan Friday.

DES MOINES, Iowa (CNN) - Former North Carolina Sen. John Edwards will outline his plan for education reform Friday, in what his campaign is calling a "major policy speech" at a middle school in Des Moines.

The Democratic presidential hopeful's proposal includes overhauling "No Child Left Behind," creating universal preschool for four-year-olds, increasing teacher pay, and creating a national teacher university, according to his campaign.

Edwards' plan includes placing more specific reforms into three broad
categories: preparing children to succeed when they show up in the classroom, giving each classroom an excellent teacher, and making sure every teacher works in an outstanding school.

"I grew up in a small, rural town and my parents didn't have a lot of money," Edwards will say, according to advanced copy of his remarks provided to CNN. "But I was lucky to have public school teachers who taught me to believe that somebody from a little town in North Carolina could do just about anything if he worked hard and played by the rules."

END_OF_DOCUMENT_TOKEN_TO_BE_REPLACED

The Register's Yepsen: Obama hurts himself by skipping Iowa debate

The Des Moines Register's David Yepsen wrote Friday that while there was no clear winner at Thursday night's debate broadcast on PBS, the clear loser was Barack Obama for declining to attend.

Meanwhile, Obama had his own byline in a column from the Quad City Times that also appeared Friday. In it, he wrote about tax relief for–who else?– seniors, the very group targeted by Thursday's AARP-sponsored debate.