Thompson: Not all campaign finance reform was good

(CNN)–Former Senator Fred Thompson says he still stands by his support of campaign finance reform when he was in the Senate..sort of.

Speaking to local reporters in Michigan on Saturday, Thompson said he was proud of his efforts to curb soft money donations, the large, unregulated amounts of money that flooded into the coffers of campaigns and political parties. "I came from the real world where it was a bad idea to give hundreds of thousands of dollars to someone who had decision making power over you," the GOP presidential hopeful said.

"The part that has not worked out and really was a mistake were the attempts to place limitations on campaign ads in certain parts of the process," the former 'Law & Order' actor said. "The Supreme Court has got better things to do then to hear a hundred different cases on a hundred different kinds of ads," he said of a process he feels has spawned a large amount of bureaucracy, diverted resources, and put "unfair limitations" on people. "I don't think that part of it was a good idea."

Thompson has come under criticism and suspicion from some conservative activists for his role as a supporter in the senate of legislation sponsored by Senators John McCain of Arizona, and Russell Feingold of Wisconsin, that sought to regulate soft money donations. Many activists equated the legislation as an assault on political free speech.

Thompson was in Michigan to address a GOP conference on Mackinac Island.

WASHINGTON (CNN) – The Florida Democratic Party will hold its presidential primary on Jan. 29, despite being told by the Democratic National Committee that doing so will result in the state losing its 210 delegates to the 2008 nominating convention in Denver, a Florida Democratic official tells CNN.

State party officials have scheduled a news conference for Sunday to make the announcement, said the official, who spoke on the condition of anonymity. In addition to losing all of its delegates, the decision also means that most of the Democratic presidential candidates will no longer campaign in Florida. The candidates have agreed not to stump for votes in any state that does not follow the DNC’s nominating calendar.

Earlier this year, Florida Gov. Charlie Crist signed legislation into law that moved the state’s primary to Jan. 29, even though it violated rules established by the DNC to keep all but four states – Iowa, New Hampshire, Nevada and South Carolina – from holding nominating contests before Feb. 5. The Republican National Committee has similar rules, but the penalty is less severe for states that violate them.

Last month, Florida Democrats asked the DNC Rules and Bylaws Committee to recognize Jan. 29 as its primary date, a request that was rejected outright. The DNC panel then gave the Florida Democratic Party a month to submit an alternative date or risk losing all of its delegates.

Prior to the August DNC meeting, Sen. Bill Nelson, D-Florida, threatened to sue the DNC if the national party barred Sunshine State delegates from attending the convention.

"If the Democratic National Committee sanctions Florida then some of us (in) the Florida congressional delegation may ask an appropriate legal venue to determine whether or not a political party's rules can supersede someone's right to vote," Nelson told reporters.

Florida Democrats’ decision to hold their primary on Jan. 29 is the latest piece of the puzzle to fall into place in what is still a yet-to-be defined primary calendar less than four months before voters begin casting votes for president. It is still unclear what dates Iowa, New Hampshire, Nevada and South Carolina Democrats will hold their nominating contests. Michigan has already moved its primary date for both political parties to Jan. 15, while the South Carolina Republican Party has scheduled its primary for Jan. 19. Both of these states are also in violation of the DNC and RNC rules.

(CNN)–Saying "I'm a believer in trade," Rep. Ron Paul says the World Trade Organization, is threatening the sovereignty of the United States.

"The WTO has now been able to come to our Congress and dictate to us, we as a Congress, and as a party has endorsed the idea that we should raise taxes on certain corporations at the directive of the W.T.O in order to satisfy and be upstanding members of the W.T.O.," The GOP presidential hopeful said Saturday. "We should never raise taxes period, but certainly because the W.T.O. tells us to do so."

Paul said the W.T.O., and other organizations that support free trade are an outgrowth of the United Nations. As a result, "I support this notion of protecting sovereignty by getting out of the United Nations," he said. The Texas Congressman said he has sponsored legislation calling for the U.S. to withdraw from the United Nations since he was elected to the U.S. House of Representatives.

Paul made his comments before a weekend retreat for Michigan Republicans on Mackinac Island, Michigan. Most of his fellow rivals for the GOP nomination were also scheduled to address the group as well.

Clinton: I am not a lesbian

WASHINGTON (CNN) - Sen. Hillary Clinton's sexuality is not the most pressing issue on the presidential campaign trail, but it is likely to get a fair amount of attention on a lazy Friday in the nation’s capital.

The Advocate asked Clinton about past rumors that she is gay.

The New York Democrat tells “The Advocate” that she is not a lesbian, according to a story in Friday’s edition of The New York Daily News.

"It's not true, but it is something that I have no control over," Clinton tells the magazine in a story set for publication next week.

“People will say what they want to say," she added.

The comments came in response to a question posed by Sean Kennedy, an editor of the Advocate: "How do you respond to the occasional rumor that you're a lesbian?"

Kennedy tells CNN he asked Clinton about the rumors because "they are a point of solidarity between her and the LGBT (Lesbian, Gay, Bisexual and Transgender) community."

"Because her political opponents, and others, have used the word 'lesbian' to hurt her personally and politically, she knows first hand the stigma associated with homosexuality just as gay people do," Kennedy said. "She did not seem surprised by the question in the least and responded like the experienced politician she is."

UPDATE: The Advocate has published the full article on its Web site

WASHINGTON (CNN) - The National Rifle Association hosted a conference in Washington, D.C. Friday.  The event drew some of the 2008 presidential contenders who were there seeking the support of the gun rights group.  Wayne LaPierre, the NRA's Executive Vice President, joined Carol Costello in CNN's Situation Room after the conference.  Watch LaPierre's take on Rudy Giuliani, Bill Richardson, and what role the NRA may play in the 2008 presidential race. 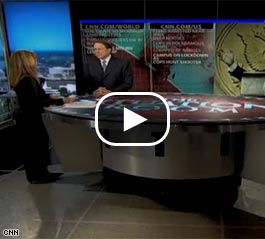 Romney: Money will be needed to take on Clinton

Romney said the GOP needs a candidate who can take on Clinton on many fronts.

(CNN)–Campaigning in the first primary and caucus states, early and often, is an essential component to capturing the GOP nomination, Mitt Romney said Saturday.

"I got to work early, and I have worked hard in the early primary states like Iowa and New Hampshire. As of a week ago Tuesday, we had done 462 events there," the GOP presidential hopeful said to reporters in Michigan. "I don't imagine anyone else has done that many events," he said. "It's grass roots, its person to person."

"I'm very pleased by the fact that our team has raised more money than any other Republican, although by a small margin Mayor Giuliani is pretty much up there with me," Romney said regarding the scramble for dollars to help fund his campaign.

Romney said that money will play an important part in the months ahead. "When it comes time to run against Hillary Clinton, we better hope we have a candidate who has the capacity to sell their message strong and well," he said. "That's been a big part of what has ignited our support. To raise the amount of money necessary to be competitive with the Clintons. If she gets the nomination, she'll probably out raise us, but I'm going to work hard to make sure that we can keep up, and we're going to fire on all eight cylinders and make sure this is the campaign that goes all the way to the White House."

Related: Romney to Republicans: 'Get House in Order'

Guns and the 2008 presidential race

WASHINGTON (CNN) - Several contenders in the 2008 presidential race where in Washington, D.C. Friday to speak at a National Rifle Associaton conference.  CNN's Bill Schneider reports on what the White House hopefuls did to win the votes of the gun rights group. 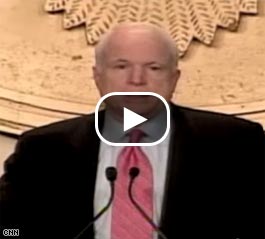