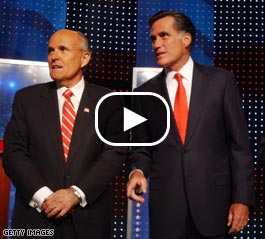 Mitt Romney's lead in the battle for the GOP presidential nomination in the all important Granite State has evaporated, according to the results of a CNN/WMUR poll conducted by the University of New Hampshire.

That statistically-insignificant, 1 point margin is a major change from CNN/WMUR's last New Hampshire poll, taken in July, when Romney held a comfortable 14 point lead over Giuliani.