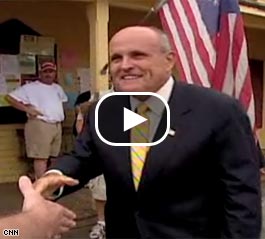 Watch John King and Wolf Blitzer, members of the Best Political Team on TV, discuss what Christian conservative leaders may do to influence the 2008 presidential race.

WASHINGTON (CNN) - The frustration of social conservatives in the Republican Party appears to have boiled over.  A group of powerful social conservatives announced recently that they may back a third party bid for the White House in 2008 rather than support GOP frontrunner Rudy Giuliani.  Watch John King's report about the threat to the GOP posed by leaders of the party's social conservative base.

(CNN) – Was the United States founded as a Christian nation?  Watch Mary Snow's report about the stir caused by Sen. John McCain's comments on the religious roots of the country.

Thompson will report raising over $8 million in the third quarter.

WASHINGTON (CNN) - Former Tennessee Sen. Fred Thompson will show that he raised more than $8 million over the past three months in his bid for the Republican presidential nomination, a source in the Thompson campaign tells CNN.

Thompson's upcoming Federal Elections Commission report will also show 70,000 donors have contributed to the former "Law and Order" star in the third quarter, according to the source, who requested anonymity because the campaign has not yet officially released the information.

Thompson formally entered the presidential race early last month, but he has been raising money since early June. The Tennessee Republican raised close to $3.5 million from approximately 9,000 donors in June, the final month of the second quarter. 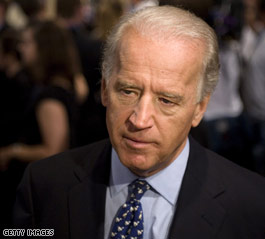 ROCK HILL, South Carolina (CNN) - Sen. Joe Biden, touting his experience on the Senate Foreign Relations Committee during a campaign stop here, said that former Vice President Al Gore and Sen. John Kerry lost the 2000 and 2004 elections because they failed to convince voters they had the experience to protect Americans.

"Why did we lose?," Biden asked a crowd of about 50 people at the office of the York County Democratic Party. "We had good, decent, honorable men running [in 2000 and 2004]. But anybody who thinks we're going to elect a president who cannot lay down unimpeachable credentials on national security, who cannot demonstrate by his or her record or character that they have the strength and vision to protect America as well as ending this war, I think we're making a mistake again."

Biden said that most Americans agree with Democrats on domestic issues, but that President Bush did a better job in 2004 of winning over voters on national security issues.

He told the crowd he would trounce the Republican nominee in a national security debate.

Biden, still in single digits in national polls, also took a thinly veiled swipe at Democratic frontrunner Hillary Clinton, suggesting that he is the only Democrat who can appeal to voters in red states. He said a viable Democratic candidate must be able to win in states that went red in 2000 and 2004, particularly in the South.

"I truly believe, and I predict to you, electability is going to become a major, major, major factor at the end of the day when South Carolinians and Iowans and folks in New Hampshire go to those polls or caucuses to cast their vote." 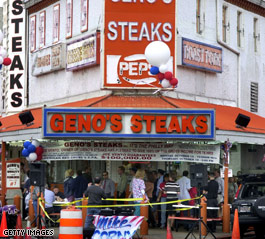 WASHINGTON (CNN) - It's almost a necessity for any presidential candidate who swings through Philadelphia - making a stop at one of the city's famous cheesesteak shops.

Joe Vento, the owner of Geno's Steaks, sparked controversy last year when he put up a sign at his store proclaiming, "This is America. When Ordering Please Speak English."

Rachel Lawton, the executive director of the city's Human Relations Commission (HRC), blasted the sign in June 2006, saying it amounts to discrimination against those who cannot speak English. A hearing on the sign was scheduled last Wednesday but was postponed because the city wanted more time to review Vento's motion to dismiss the case, according to the Philadelphia Evening Bulletin.

According to his Web site, Giuliani also proposes that all "immigrants who want to become citizens must truly read, write, and speak English and learn American civics."

Biden's amendment to the Defense Authorization Bill calls for dividing Iraq into a loose federation of three provinces. It passed the Senate overwhelmingly last week by a vote of 75-23.

Al-Maliki criticized the plan last Friday, telling the Associated Press:
"It is an Iraqi affair dealing with Iraqis. Iraqis are eager for Iraq's unity ... Dividing Iraq is a problem, and a decision like that would be a catastrophe."

Biden, who is seeking the Democratic presidential nomination, hit back.

"Other Iraqi politicians have said we have no right to tell the Iraqis [what to do]," Biden told reporters. "Let me tell you, we have a right. Three thousand and eight hundred dead. Twenty seven thousand wounded. Billions of dollars. Let me tell you as President of the United States, they'd have to understand full well that if they don't keep their commitment to implement their constitution then they're on their own. And so, ladies and gentlemen, the idea that al Maliki questions whether or not we have a right to express our opinion, he'd better get it straight real quick."

END_OF_DOCUMENT_TOKEN_TO_BE_REPLACED

WASHINGTON (CNN) - Muslim and Jewish groups on Monday sharply criticized Sen. John McCain's comments that he would prefer a Christian president to lead the United States.

The Arizona Republican's remarks came in an interview with Beliefnet, a Web site that covers religious issues and affairs.

"I just have to say in all candor that since this nation was founded primarily on Christian principles, personally, I prefer someone who has a grounding in my faith," the GOP presidential hopeful told the Web site in an interview published Saturday.

So far, Edwards has raised more than $30 million, and Deputy Campaign Manager Jonathan Prince said the campaign is on the right track to reach its goal of $40 million by January. Prince credited the campaign's aggressive grassroots outreach and said the Edwards received donations from 150,000 Americans, with 97 percent of the contributions less than $250.

Edwards announced last week that he would seek public financing for his campaign, which Prince said would bring the campaign up from $12 million to $22 million in cash on hand for the first primary. Edwards challenged to Sen. Hillary Clinton, D-New York, and Sen. Barack Obama, D-Illinois, to join him in accepting public financing.

Earlier in the day, Obama reported that he raised $20 million in the third quarter - all but $1 million can be spent in the primary.

McCain: Calls on China to intervene in Burma

"We should impose even stronger sanctions and we should tell the Chinese that if they're going to play a major role in the world, they should exercise their influence over Burma to stop this wanton killing and imprisonment of innocent people who only seek democracy and freedom," said McCain, who is seeking his party's presidential nomination. Myanmar is better known as Burma.

When asked by CNN if it was realistic to expect the Chinese government to exert their authority in Burma, McCain issued this warning.

"It's realistic to expect them to act in the mature fashion that they should as a world power and it's disgraceful they haven't, and we should condemn them if they don't," he said. "And it would impact at least in some ways our relations with China. This is all about killing innocent people and they can do something about it. Now they can’t maybe bring it to an immediate halt but they can certainly have a beneficial effect on the Burmese government."

Obama raises more than $19 million for the primary

WASHINGTON (CNN) - Sen. Barack Obama, D-Illinois, raked in approximately $20 million in the third quarter for his White House run, his campaign announced Monday. All but $1 million raised in this three month time period can be spent in the Democratic primary.

The $20 million falls shy of Obama’s second quarter haul when he shattered fundraising records by raising $32.5 million, $31 million of which he can use in his bid for the Democratic nomination. Still, Obama’s fundraising is impressive given that it was conducted during a historically slow time period when people are focused on summer vacations and preparing their children for the new school year. On Friday, CNN reported that Obama would show he raised in the neighborhood of $20 million.