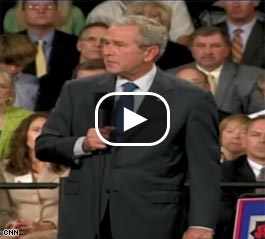 Watch Ed Henry's report on President Bush's veto of a bill that would have expanded a childrens' health insurance program.

WASHINGTON (CNN) - President Bush kept a promise on Wednesday to veto a bill that would have increased the number of children covered by a state-federal health insurance program. The bill enjoyed bipartisan support and Ed Henry reports on why Bush vetoed the bill and what the political consequences of the veto may be for Bush and the Republican Party.