Can Obama fire it up? 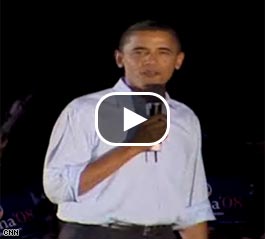 On taxation, Romney jabbed the New York Mayor¹s commuter tax, an issue that
resonated with the crowd.

"Mayor Giuliani sued the republican governor to keep in place the commuter
tax. Can you imagine what would have happened here in New Hampshire if I, as
governor of Massachusetts, said anybody who commutes to Massachusetts is
going to have to pay an extra special tax as a commuter? It just seems
absolutely wrong."

Thompson tours one of the laboratories at the Lincolnway Energy plant in Nevada, Iowa Wednesday.

Thompson currently has $7 million in cash on hand. He received donations from 80,000 individuals.

Campaign Manager Bill Lacy said Thompson appealed to that many Americans because he is an "authentic conservative."

"Some of the other campaigns have spent tens of millions of dollars so far, only to lose support among voters; yet, Fred is running strong in most of the early primary states without having spent a dime on advertising," Lacy said. "We are on plan and will have the funding we need to get Fred's message to voters."

Thompson reported that he raised $12.7 million since he first started collecting campaign contributions this summer, $3.4 million of which was raised near the end of the second quarter.

Richardson has no interest in Senate seat

Richardson has no interest in running for the Senate, an advisor said.

“Gov. Richardson is running for the White House unequivocally, and we are going to be the Democratic nominee,” the adviser said.

Richardson is running for the Democratic presidential nomination, but there have been rumors that he would drop out of the race and run for the Senate if Domenici retired. Domenici, 75, was set to announce his retirement Thursday afternoon at a news conference in Albuquerque. Domenici was first elected to the Senate in 1972.

The senior Richardson adviser noted that if Richardson does not win the Democratic nomination, he will return to his job as governor. Richardson made a similar comment during a recent CNN editorial board meeting.

“He has no interest,” in the Senate seat, the adviser emphasized. “He will go back and continue his job as governor serving the people of New Mexico.”

Craig: I am staying

WASHINGTON (CNN) - Idaho Sen. Larry Craig said Thursday he will remain in the Senate and study "additional legal options" after a Minnesota judge refused to throw out his August guilty plea stemming from an airport sex sting.

In a statement from his office, the three-term Republican said he was "extremely disappointed" in Thursday's ruling.

"I am innocent of the charges against me. I continue to work with my legal team to explore my additional legal options," he said.

He said the past few weeks have shown that "it is possible for me to work here effectively," and said any replacement appointed by Idaho's governor would not have the seniority and committee assignments "that are valuable to Idaho."

Biden: Fix 'No Child' law, but not 'til I'm president

DES MOINES, Iowa (CNN) - Vowing that he would be "the" education president "unlike any president has in American history," Sen. Joe Biden, D-Delaware, offered up his ideas for education reform Thursday, which include plans to overhaul the No Child Left Behind law, but, he says, not until he's in the Oval Office.

"I would prefer the Democrats not try to fix No Child Left Behind...until I'm president," the Democratic hopeful said. "I'm not being facetious. I mean that seriously."

Biden said he believes in waiting because he says NCLB couldn't be completely fixed during the current administration. Instead, he'd rather see it "tinkered with" for now so that he can be a part of a "wholesale re-do from the White House."

END_OF_DOCUMENT_TOKEN_TO_BE_REPLACED

"Now, I got to admit, I'm happy that Michigan has jumped up, because I was born and raised there, and my dad was governor there. I love the automobile industry. Michigan's success is personal to me," he said. "I want to see the state succeed, and so it doesn't bother me that they are upping it."

Last month, Michigan enacted a law moving its presidential primary to January 15, in violation of both national Republican and Democratic party rules.

When asked whether he would be able to carry his current home state of Massachusetts in the general election, Romney admitted it would be a challenge.

"I have never told anyone I'd carry Massachusetts. I thought that was one of the last states I'd be likely to carry in a presidential race. I'll make a real effort, and I think I got a shot, but it's a very liberal state, and, frankly, my message connects with the other
forty-nine states better than it does with Massachusetts."

NEW YORK (CNN) - Former Vice President Al Gore is expected to make an appearance on the NBC comedy show "30 Rock" in November. Gore was in New York last week to tape the episode, and a Gore spokeswoman says "he did have a great time".

Gore's office anticipates the episode will air as part of, what it called, NBC's upcoming "Green is Universal" week of environmentally-based programming, Nov. 4 – 10.

As to what role the 2000 Democratic presidential nominee plays on the show or what the plot entails, "you gotta watch the show," says Gore spokeswoman Kalee Kreider. 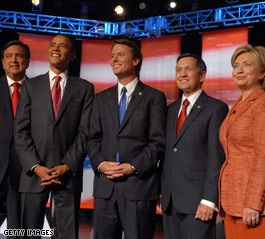 It’s the season when candidates begin attacking each other, Time reports.

It's not in any network's fall lineup, but there's no doubt that the new TV season will include several episodes of that quadrennial reality show favorite: When Candidates Attack.

(CNN) - A Minnesota judge has denied Sen. Larry Craig's request to withdraw his guilty plea to a disorderly conduct charge stemming from his arrest in an airport men's room sex sting.

In a 27-page order, Judge Charles Porter found Craig had entered the guilty plea "accurately, voluntarily and intelligently" and it was too late to withdraw his admission. (Read order [PDF])

Craig was arrested in June by Minneapolis-St. Paul International Airport police, who accused him of making sexual overtures in an airport men's room to an undercover male police officer. Craig pleaded guilty to the misdemeanor count in August.