The Situation Room gets Kinky 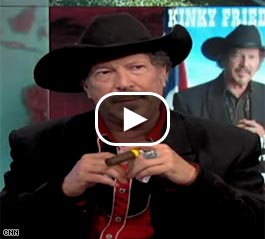 WASHINGTON (CNN) - Author Kinky Friedman was in CNN's Situation Room Friday.  He spoke with Wolf Blitzer about his new book, his previous run for governor of Texas, the 2008 presidential candidates, illegal immigration, and cigars. Watch the interview and spend a little time with Kinky.

Giuliani had some harsh words for Hillary Clinton Friday.

Speaking at the American's for Prosperity Foundation Summit, the Republican White House hopeful criticized Clinton’s proposal for its high cost and said such a suggestion shows the Democratic presidential candidate’s lack of executive experience.

"Do you know the first question I asked? ‘How many children are born in the United States?’ Because, I was going to multiply that by the $5,000,” Giuliani said. “Because I ran a city. I've run a business. I know how to make a payroll and I know how to reduce expenses. ‘Do you know how much money it is per year?’ Twenty billion."

“Hillary, that's real money," he added. "You and Bill can't afford that. It's got to come out of somebody's pockets. You know who it comes out of?”

"In the case of the three leading Democrats, [they] have never run a city, they've never run a state, I don't think they've ever run a business," Giuliani said. "This is why they make proposals like this."

END_OF_DOCUMENT_TOKEN_TO_BE_REPLACED

COLUMBIA, South Carolina (CNN) - The Democratic House Majority Whip conceded Friday that getting the votes to override President Bush's veto of the State Children's Health Insurance Program bill will be an uphill battle.

"Well, it's going to be tough to do that," said South Carolina congressman Jim Clyburn in an interview with CNN at his office in Columbia. "We got 265 votes for SCHIP, 45 of those votes were Republican votes. They get to a veto, we have to have 290 votes. It will be very very tough to get 290 votes. I think that, a lot of people think that, 45-50 may be the high water mark on the Republican side.

"And if the White House were to weigh in and say we really want this veto sustained, I think that some of that 45, two or three of them may fall off and not vote to override," he said. "I just believe that you got to make the effort and do it one vote at a time."

Clyburn suggested the current bill was "messed up" because it was crafted for easier passage in the Senate. He said if the current veto is maintained, his party should write another "Democratic bill" and send it back to the Senate to face a filibuster. 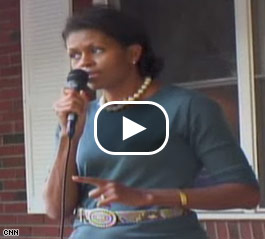 Watch Michelle Obama on the stump in New Hampshire Friday.

NASHUA, New Hampshire (CNN) - For those who have questioned the tenacity of Barack Obama's presidential campaign, his wife , Michelle, is fired up. In an emboldened speech Friday, Obama answered critics of her husband's professional qualifications and declared he can "stand up to Republicans."

"Don't worry about whether Barack Obama is ready–because he's ready. Michelle Obama is ready. We're in this,” she said. “We've already made the sacrifice. We've already suffered through the pains of a political process. We've invested our life in this."

On experience, Mrs. Obama addressed the issue head on calling him "one of the most experienced" people and pointed to his success as a first-term senator from Illinois.

"Trust me, Illinois is not bean bag politics. It's mean, vicious politics. So if people want to know, can he stand up to the republicans? Trust me, I've seen it. We've experienced it. We come out of Chicago, that's hard politics. And to be able to do it and be successful and still maintain a level of integrity and respect among your peers is a real accomplishment."

END_OF_DOCUMENT_TOKEN_TO_BE_REPLACED

Two of Obama's rivals weigh in on flag pin 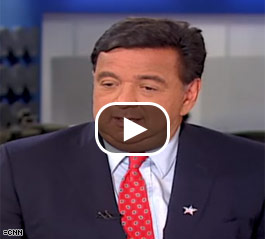 Watch Richardson weigh in on Obama's lack of a flag pin.

WASHINGTON (CNN) - Sen. Barack Obama's, D-Illinois, decision not to wear an American Flag pin was dismissed as a non-issue Friday by two of his rivals for the Democratic presidential nomination.

Sen. Hillary Clinton, D-New York, said she didn't know if it was a "serious issue" that Obama didn't wear a pin and added, "There are so many ways that Americans can show their patriotism." (Video: Clinton weighs in on the flag pin)

"Wearing a flag pin. Flying the flag. Pledging allegiance to the flag. Talking about the values of America. Teaching your children about what a great nation we have. Standing up for those values. Speaking out. There's just so many ways one can demonstrate patriotism," Clinton said in a press conference.

She added that she wears her pin "from time to time."

Meanwhile, CNN's Don Lemon asked New Mexico Gov. Bill Richardson, who was wearing a flag pin at the time, what he thought of the matter.

Obama told a KCRG-TV reporter this week that he has made a conscious decision not to wear the pin.

"I decided I won't wear that pin on my chest,” the Democratic presidential candidate told the reporter in Iowa City, Iowa. “Instead, I'm going to try to tell the American people what I believe will make this country great. Hopefully that will be a testimony to my patriotism."

WASHINGTON (CNN) - A group that promotes fiscal conservatism gave a warm welcome to a partial field of Republican presidential hopefuls at a candidate forum Friday.

Rudy Guiliani drew the biggest applause after he and four GOP rivals each spoke during the "Defending the American Dream Summit" organized by the Americans for Prosperity Foundation.

Guiliani opened the forum with a combination of humor and barbs, while citing his practical fiscal experience as New York City mayor. Unemployment offices became “job centers,” he noted, and said the Democratic candidates had better realize their proposals will cost money.

END_OF_DOCUMENT_TOKEN_TO_BE_REPLACED 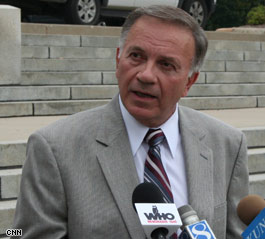 Hanson overturned Iowa's state ban on same-sex marriages in August. Hanson has since issued a stay on his ruling.

At a press conference on the steps of the Iowa State Capitol, Tancredo, a Republican congressman from Colorado, denounced Hanson, calling him an "activist judge."

"If a community cannot limit marriage to a man and a woman, how can it stop two men and a woman or three women and two men from declaring a communal marriage?" Tancredo continued. "If a child is just as well off with two mommies instead of a mother and a father, why is it not even better off with four momies or three daddies?"

He said the solution to the problem of activist judges in regard to this issue is a federal ban on gay marriage.

"If the Constitution needs to be changed, and in this case it apparently may need to be as a result of the actions taken by this judge, then there's a way to do it: it's an amendment process, and that's what I propose."

Sen. Barack Obama campaigned in Iowa Wednesday without the familiar lapel pin many members of Congress have worn since September 11, 2001.

(CNN) – An astute reporter for CNN affiliate KCRG-TV noticed there was something missing from Sen. Barack Obama’s wardrobe. He wasn’t wearing the common American flag lapel pin, a fashion fixture in post-9/11 politics used to display patriotism following the attacks.

"I decided I won't wear that pin on my chest,” the Democratic presidential candidate told the reporter Tuesday in Iowa City, Iowa. “Instead, I'm going to try to tell the American people what I believe will make this country great. Hopefully that will be a testimony to my patriotism."

Obama touched upon the exchange again Wednesday at a speech in Independence, Iowa.

"I haven't worn that pin in probably a very long time. I wore it right after 9/11. But after a while, you start noticing people wearing the lapel pin but not acting very patriotic,” he said. “My attitude is that I'm less concerned with what you're wearing on you lapel than what's in your heart. You show your patriotism by how you treat your fellow Americans, especially those ones who serve."

Obama has been campaigning throughout Eastern Iowa since Monday.

Watch Huckabee speak at the Americans for Prosperity Summit Thursday.

WASHINGTON (CNN) - Former Arkansas Gov. Mike Huckabee is among one of several Republican presidential hopeful’s addressing the “Defending the American Dream Summit” Friday held by Americans for Prosperity, a group that advocates for lower taxes and less government regulation of business. Huckabee says that radical change is necessary for the U.S. tax code. 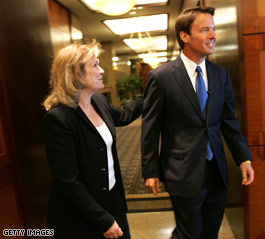 Mrs. Edwards, whose husband was the vice presidential nominee in 2004, said in an interview with Air America's Richard Greene she was "very disappointed" then-Democratic presidential nominee John Kerry chose not to contend the election result in the crucial swing state of Ohio - where he lost by approximately 120,000 votes.

Mrs. Edwards added that reported voting irregularities in Ohio caused "a lot to be suspicious about" and said the real winners of the 2004 election would likely never be known.

"I don't think we're going to ever know [who won] and that's a shame," she said. "Certainly there's a lot to be suspicious about."

"We're never going to have the kind of certainty we need to have," Mrs. Edwards continued. "I don't care if I find out the evening in the first Tuesday of November. If I don't find out until Friday who the president is but I am pretty sure it’s the right answer, that's fine with me."

Conceding the election in Boston the day after polls closed, Kerry said, "The outcome should be decided by voters, not a protracted legal process. I would not give up this fight if there was a chance that we would prevail, but it is now clear that even when all the provisional ballots are counted, which they will be, there won't be enough outstanding votes for us to be able to win Ohio."