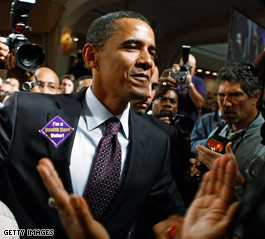 GREENVILLE, South Carolina (CNN) – Sen. Barack Obama is increasingly invoking his Christian faith on the campaign trail, and on Sunday morning the Democratic presidential candidate will become a preacher of sorts by addressing an evangelical megachurch in Greenville.

Obama will speak to the Redemption World Outreach Center, which describes itself as "a Spirit-filled Church, characterized by dynamic worship, supernatural miracles, and relevant ministry for all ages ...
reaching people from all walks of life." Obama's campaign calls the appearance "an opportunity for the Senator to have a morning of fellowship with South Carolinians."

The church has 4,200 seats. Members of the church said Sunday morning that they have a total congregation of over 10,000.

It's rare for Democratic candidates to venture to the traditionally conservative Upstate region of South Carolina, which is characterized politically by church-going Republican primary voters living in and around Greenville and Spartanburg.

But Obama's visit here is not surprising given his campaign's recent efforts in South Carolina to reach out to Christian voters, including the state's large African-American population that makes up an estimated 50 percent of Democratic primary voters. The state campaign is in the midst of promoting Obama's values through a grassroots effort called "40 Days of Faith and Family," which is reaching out to primary voters through gospel concerts and a series of faith forums.

Last weekend, Obama attended but did not speak at two churches in Columbia, one predominantly black and one predominantly white. At a town hall meeting in Aiken on Saturday, Obama was introduced by a pastor who led the crowd of 2,400 in a brief prayer. There are times on the stump when Obama even sounds like a pastor himself, referencing New Testament phrases and sometimes saying "I'm not gonna preach to ya!" when emphasizing a point to his audience.

According to the religion web site Beliefnet and its "God-o-Meter" tool that measures "God-talk" in the presidential campaigns, Obama invokes religion more than any of his Democratic competitors.

Obama is set to speak during the 9 a.m. service.

Richardson's plan would immediately withdraw all U.S. forces from Iraq and focus on diplomacy.

"To me it's the only way this problem is going to be resolved," Smith said in a phone interview Saturday morning. "Right now we have a quicksand of a civil war, and I don't believe we can just pull out precipitously in a six month period of time without jeopardizing our interests in the region. We don't need another evacuation that we had in Vietnam."

He said he had spoken with Richardson and his staff.

Smith said he did not consider joining any other Democratic campaign besides Biden's, and noted he was drawn to Biden because he is an Irish-American.

"Irish-Americans faced the same problems African-Americans have faced in this country," Smith said.

The Richardson campaign did not comment on Smith, but defended the Governor's Iraq plan.

"Governor Richardson has a real plan to get our troops out of Iraq," said Richardson spokesman Lachlan McIntosh. "He's the only major candidate who will get all of our troops out quickly and leave no residual forces whatsoever. Our men and women are currently targets in Iraq. The longer we stay, the more will die."

(CNN)–Senator Hillary Clinton, D-New York, is leading the pack of Democratic presidential candidates in the politically crucial state of Iowa, according to a poll of likely caucus participants released by the Des Moines Register on Sunday.

The numbers were a significant change from the paper's last poll in May, when Clinton came in third, behind Edwards who was up top, followed by Obama in second place.

On the Republican side, there was no change from the poll in May, as former Massachusetts governor Mitt Romney held on to his lead with 29 percent support of those likely GOP caucus goers polled. Former Tennessee senator Fred Thompson, who formally entered the race last month, had 18 percent.

WASHINGTON (CNN) - U.S. Rep. Jo Ann Davis, R-Va., died Saturday after battling breast cancer, according to a statement released by her office. She was 57.

Davis died at her Gloucester, Va., home. She was first diagnosed with cancer in 2005, according to the statement, and had a recurrence earlier this year.

"Davis had been receiving breast cancer treatment at Duke University and just recently had received positive reports on her condition," the statement said. "However, during the last week Davis' health took a turn for the worse."

Funeral arrangements will be forthcoming, the statement said.

President Bush said in a statement that during her four years in the House, Davis "was an effective advocate for the people of her district and a strong supporter of our men and women in uniform. She was a fine example of a public servant who worked hard to cut government waste to ensure the people's money was used wisely. Her common-sense values will be missed on Capitol Hill."

"Jo Ann and I were both elected to the United States Congress in 2000 after serving together for many years in the Virginia House of Delegates," said Rep. Eric Cantor, R-Va., in a statement. "She fought for, and embodied, the core values of Virginia."

Bush said Davis' determination to fight her cancer "is an inspiration to all of us."

Rep. Adam Putnam, R-Fla. and chairman of the House Republican Conference, noted in a statement that when Davis was first diagnosed with cancer, instead of retiring, she "pressed on, continued to serve with distinction the people of the Commonwealth and the country she loved, and beat the disease." After the cancer returned, he said, "she courageously took the same path."

"Jo Ann Davis was an inspiration to all of us fortunate enough to serve with her, and we are all deeply saddened by the news of her passing," Putnam said. "At this difficult hour, our thoughts and prayers are with Jo Ann's husband, Chuck, and their loved ones."