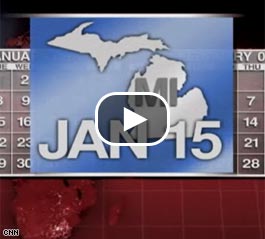 Watch Bill Schneider's report on why several Democrats removed their names from the ballot in Michigan's presidential primary.

(CNN) - Is it just an effort to honor the Democratic National Committee's rules or a veiled effort to undermine Sen. Hillary Clinton, D-New York? Or, maybe a little bit of both? CNN Senior Political Analyst Bill Schneider reports. 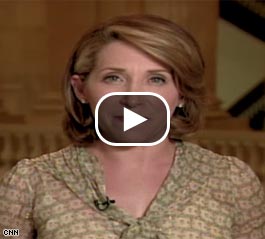 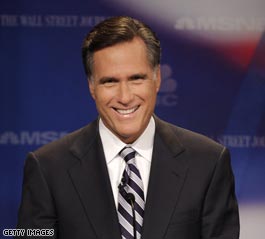 (CNN) - How is the race for the White House like an episode of NBC's "Law and Order?" Former Massachusetts Gov. Mitt Romney explained during Tuesday's Republican presidential debate in Dearborn, Michigan.

"This is a lot like ‘Law and Order,’" Romney said. "It has a huge cast. The series seems to go on forever, and Fred Thompson shows up at the end."

Thompson, the former Tennessee senator and former co-star on the long-running crime series, laughed at the jab at his late entrance into the GOP race and the comparison to his television alma mater.

"And to think, I thought I was going to be the best actor on the stage," Thompson said.

Giuliani: Despite bashing, America is most attractive, envied

(CNN) – Former New York City Mayor Giuliani tried to rile up voter confidence in the U.S. brand during a debate in Michigan Tuesday, saying millions of people want to come to the U.S. and Americans need to get their heads up.

The topic arose when he was asked if London would replace New York as the financial capital of the world, to which the former Big Apple mayor responded "No way, no how!"

Thompson: Race was boring without me

Fred Thompson made a quip about his delayed timing in entering the GOP presidential race.

(CNN) - When asked at Tuesday's GOP debate in Dearborn, Michigan, if he tossed his hat in the ring too late, former Tennessee Sen. Fred Thompson said he had no regrets about his late entry into the race.

"I’ve enjoyed watching these fellas,” he said. “I gotta admit, it was getting a little boring without me.”

He also said the timing of his entry “seems about right to me.”

Most GOP hopefuls say NASDAQ deal not a security threat

(CNN) - Most of the Republican presidential candidates said in a debate Tuesday that they support a Middle Eastern oil firm's bid for a large stake in a major U.S. stock exchange.

The majority of candidates agreed that the deal sealed earlier this year by oil-rich Borse Dubai for 20 percent of the NASDAQ stock exchange did not impact national security.

Former New York City Mayor Rudy Giuliani fielded the question first saying the foreign company should be able to own 20 percent of the stock exchange and that Americans should support foreign-domestic deals "if they are considered to be safe. If they pass safety and security clearances," he said.

The deal was highly scrutinized by the financial and political community opposed to foreign ownership of U.S. businesses.

"But you just can't rule out foreign companies. There's a whole procedure you go through as to whether or not are they safe. Are they secure? We cannot stop doing business with the rest of the world," Giuliani added.

"Of course, you let a country invest in the United States,” he said. “Because we're going to have to stop thinking always in terms of defense and trying to keep other people out.”

Hunter said he does not believe the company should have been allowed the large stake in the exchange.

"Because I don't trust them," he said.

"If Dubai wanted to buy Wal-Mart, I might think about it," Tancredo joked.

(CNN) - Reminiscent of the tussle the two had in a May GOP debate, on Tuesday, former New York City Mayor Rudy Giuliani and Texas Rep. Ron Paul reignited a war of words over 9/11.

Giuliani took issue with Paul's contention that in "220 years" Americas has never been under imminent attack. Paul was responding to a question on whether the president needs Congress to approve a potential invasion of Iran.

"I don't know where he was on September 11," Giuliani said in response to Paul's comments.

"That was 19 thugs," Paul sharply fired back. "That had nothing to do with a country."

"Well, I think it was kind of organized in Afghanistan and Pakistan," Giuliani said. "And if we had known about it, maybe - maybe hitting a target there, quickly, might have helped prevent it."

The debate was similar to an exchange the two had in a May 23 debate, when Giuliani sharply criticized Paul for saying the 9/11 attacks were the result of America's involvement in the Middle East.

"As someone who lived through the attack of September 11 - that we invited the attack because we were attacking Iraq - I don't think I've ever heard that before, and I've heard some pretty absurd explanations for September 11th," Giuliani said then.

In response, Paul stood by his comments and said that "if we think that we can do what we want around the world and not incite hatred, then we have a problem ... They come and they attack us because we're over there."

(CNN) – Sen. John McCain joked about his opposition to ethanol subsidies during a question about innovation in the auto industry at Tuesday’s Republican presidential debate in Dearborn, Michigan.

“I have a glass of ethanol every morning before breakfast, but I still don’t support the subsidies, and I don’t think we need them,” he said.

Arizona Senator John McCain served in the military during the Vietnam war.

(CNN) - Trying to separate himself from his Republican rivals, Sen. John McCain, R-Arizona, said at Tuesday’s presidential debate in Dearborn, Michigan, that he was the only GOP candidate to predict years ago that military action would not be enough to win the war in Iraq.

"I'd just like to mention I'm the only one on this stage that four years ago said this is a failed policy in Iraq. It's not going to work. It’s got to be changed," McCain said. "I was criticized by Republicans for my severe criticism of Secretary [of Defense Donald] Rumsfeld. I advocated the strategy that's succeeding, and thank God the American people are giving us a little window."

Although a staunch supporter of the war in Iraq, McCain has called Rumsfeld "one of the worst secretaries of defense in history" and has criticized the management of the war effort.

Sparks fly as Giuliani, Romney battle it out on taxes, spending

Romney took Giuliani to task over a commuter tax he backed as New York Mayor, and his effort to fight a presidential line-item veto. Romney called Giuliani’s positions “a mistake” and said, “when it's all said and done, if you're a New York taxpayer, city taxpayer, your state and city tax combined can reach as high as 10 percent. And in our state, if you're a Boston worker, it's going to be more like 5.3 percent.”

Giuliani accused Romney of not controlling taxes while in office.

But Romney argued a reworked version would be legal, saying, “I do not believe the line-item veto is properly structured. The president, just last year, introduced a line item veto that passes constitutional muster.... I'm in favor of the line item veto to make sure that the president is able to help get out pork and waste. Washington is finally going to have to have a reduction in spending.