Clinton explained Thursday why she opted to stay on the Michigan ballot .

(CNN) - Democratic presidential hopeful Hillary Clinton seemed to hint Thursday she expects to win her party’s nomination, as she defended the decision to remain on the Michigan primary ballot. But just down the road in New Hampshire, another Democratic White House contender, Bill Richardson, accused Clinton of having it “both ways.”

Clinton was asked about the issue on a New Hampshire radio show, days after five Democratic candidates removed their names from the Michigan ballot after the Democratic National Committee ruled the state violated party rules by scheduling its primary before February 5.

“I just personally did not want to set up a situation where the Republicans are going to be campaigning between now and whenever, and then after the nomination, we have to go in and repair the damage to be ready to win Michigan in 2008,” Clinton said in an interview on New Hampshire Public Radio program “The Exchange.”

Clinton said any weakness in Michigan could hurt Democratic chances to win the state in 2008. “I did not believe it was fair to just say, 'Goodbye Michigan' and not take into account the fact we're going to have to win Michigan if we're going to be in the White House in January 2009," she said.

Richardson, one of the Democrats who removed his name from the Michigan ballot, expressed frustration over Clinton’s decision.

“Maybe she's made up her mind that she's the nominee, but you can't have it both ways and say you're not going to be on the ballot in Michigan and say OK, leave my name on the ballot,” Richardson said at a campaign stop in Manchester.

DES MOINES, Iowa (CNN) - Drawing comparisons between New York Sen. Hillary Clinton's current healthcare plan and the one she championed in 1993, Arizona Sen. John McCain joked Thursday, "I think they put some lipstick on the pig, but it's still a pig."

"There are many things that concern me about [Clinton's plan]," the Republican presidential candidate said. "It's.... eerily reminiscent of what they tried back in 1993."

McCain also said he traveled around the country that year "trying to make people aware of the catastrophic consequences that would ensue if we had enacted that healthcare plan."

"It is the liberal outlook. Let government do it. That's the ultimate solution," McCain added. "I haven't examined all the details of the plan, but it is the big government system with mandates, eventual mandates, as I read it."

The presidential hopeful said the plan from 1993 was met with "a lot of support from big business." He argued that large businesses favor government-run healthcare because "they don't want to pay for it themselves."

WASHINGTON (CNN) - Democratic presidential candidate Barack Obama criticized Sen. Hillary Clinton Thursday for her vote in support of a resolution calling an Iranian group a terrorist organization, saying it exhibited the "flawed" judgment she used during the vote to authorize the Iraq war five years ago.

The resolution, which declared the Iranian Revolutionary Guard a terrorist organization, could be used by President Bush as a "blank check" that he interprets as authorization to take military action against Iran, Obama said.

"We know in the past that the president has used some of the flimsiest excuses to try to move his agenda regardless of what Congress says," Obama told CNN's Wolf Blitzer.

When asked by an audience member at a campaign event Sunday why she voted for the resolution that the questioner said authorized military action against Iran, Clinton said, "The premise of the question is wrong," and went on to argue that the measure calls for the terrorist label so that sanctions can be imposed.

The sanctions, Clinton said while campaigning in New Hampton, Iowa, will in turn "send a clear message to the leadership" and lead to stronger diplomatic efforts.

MANCHESTER, New Hampshire (CNN) –Democratic presidential candidate
Bill Richardson unveiled his education plan Thursday at Manchester West high school.
Describing the current education system as “broken,” the New Mexico Governor called
for an end to the No Child Left Behind policy, an increase in teacher salaries
and a commitment to arts in schools.

Characterizing his plan as “bold and comprehensive,” he admitted it could
not be done on the cheap but noted, “Unlike the timid plans of others, mine
is a $60 billion investment in our nation’s future.”

When asked by a senior student where the money would come from to encourage
pre-kindergarten education, the governor said, “I’m ready to put the money
into education because I think that’s the foundation of how we can deal with
poverty, competitiveness, family, values, family reunification, how we can
create higher paying jobs and better citizens.”

Some students seemed disconnected from the points Richardson was trying to make.
One girl said she didn’t understand the governor’s use of the word “earmark”
and would have to look it up later.

Richardson on Clinton: 'She wants to have it both ways' 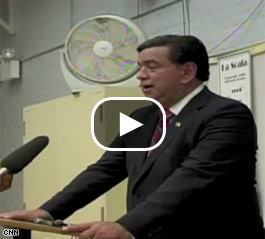 "I signed a pledge not to campaign in Michigan because I respect the sanctity of Iowa and New Hampshire. I noticed that Senator Clinton didn't do that. She wants to have it both ways. She thinks she's the nominee, so she doesn't want to alienate Michigan voters."

"She's not the nominee," Richardson repeated. "You've got three months to go, and.... I'm moving up. This is going to be a contest. The voters of New Hampshire and Iowa have not made up their mind."

Education led the Governor’s agenda: reading stories, speaking Spanish and
promoting arts in the schools. In between he answered a question from one
student on why he wanted to be President.

“I believe I can bring this country together, a country that is very divided
today over the war, over the lack of health care and over the immigration
debate. I believe I have the experience and the love for this country and
the ability to govern.”

His plan for healthcare may have got lost in translation, but when the New
Mexico Governor stated he would get rid of junk food in schools. A
monumental groan swept over the room. One eight year old saying, “I don’t
like that.”

Although the Governor’s classroom audience was below the legal voting age,
he found a way to ask for their support.

“You got to tell your mom and dad. More so than your friends,” he said
playfully.

Obama: It's time to show the differences 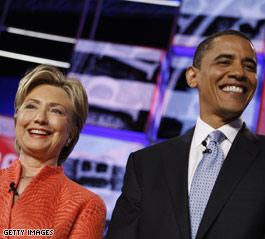 Obama told CNN Thursday it's time to show where he differs from Clinton.

WASHINGTON (CNN) - Democratic presidential candidate Barack Obama told CNN Thursday he will step up efforts to clarify his differences with rival Hillary Clinton, in what the Illinois senator is calling the "next phase" of his campaign.

"There's no doubt we are moving into a different phase of the campaign," Obama told CNN's Wolf Blitzer in an interview slated to air on The Situation Room later today. "The first part of a campaign is to offer some biography and give people a sense of where I've been and what I am about. (Related: Obama: Clinton vote on Iran shows 'flawed' judgment)

"In this next phase we want to make sure that voters understand that on big issues, like the decision to go into the war in Iraq, I had real differences with the other candidates and that reflects on my judgment," he continued.

In what could easily be seen as a direct shot at Clinton, Obama also suggested he could better unite the country and offer "something new, as opposed to looking backwards and simply duplicating some of the politics that we've become so accustomed to that frankly the American people are sick of." (Video: Watch key excerpts of Wolf Blitzer's interview with Obama Thursday)

The Illinois Democrat would not say whether he would consider Clinton as his running-mate should he become the party's nominee, saying, "I think Sen. Clinton is a very capable person. Right now my goal is to make sure I am the nominee and she is still the senator from New York."

Dodd plans to give Red Sox tickets to some lucky supporters.

(CNN) - Baseball’s American League Championship Series between the Boston Red Sox and the Cleveland Indians entered the realm of presidential politics Wednesday when presidential hopeful and Red Sox fan Chris Dodd announced a contest for tickets to Game 6 of the series at Boston’s Fenway Park.

“There’s nothing more American than baseball, and it doesn’t get much better than sitting at Fenway Park to watch the Red Sox in the playoffs,” Dodd said in a statement released by his campaign. “It’s been a long three years since the Sox won the World Series in 2004, but the team is on the winning path once again. My campaign is about getting results, and I’m confident the Red Sox are as well. But they can’t do it alone, nor can I, so I am hoping for some help by my side when I cheer them to victory.”

The Red Sox advanced to the ALCS after sweeping the Los Angeles Angels 3–0 in the opening series of the playoffs. The Indians beat Boston’s arch-rival, New York Yankees, 3 – 1 in their opening round.

Boston and Cleveland last met in the postseason during the Truman Administration. The Indians won a one-game American League playoff against the Red Sox in 1948 by the score of 8-3, and went on to defeat the Boston Braves in the World Series.

If Gore wins a Nobel Peace prize, presidential talk is certain to heat up again.

WASHINGTON (CNN) - Will Al Gore add a Nobel Peace Prize to his Oscar and Emmy honors?

"An Inconvenient Truth," a documentary featuring the former vice president captured two Academy Awards in February. The film focuses on Gore and his worldwide travels to educate the public about the severity of global warming. (Related: Draft Gore group steps up efforts)

Last month Gore picked up an Emmy - the highest award in television - for "Current TV," which he co-created. The show describes itself as a global television network that gives its viewers the opportunity to create and influence its programming.

Terwilliger tells CNN his firm is "assisting Judge Gonzales as we assist many companies and individuals when they are cooperating with investigations. It is always unfair for anyone to assume that hiring a lawyer represents anything other than common sense."