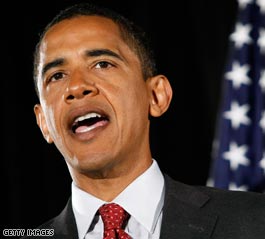 (CNN)–Senator John McCain, R-Arizona, took off the gloves with Mitt Romney, over comments he said the former Massachusetts governor made Friday.

"Former Governor Romney yesterday proclaimed himself the only real Republican in this race," McCain said according to remarks released by his campaign for delivery Saturday to a gathering of the New Hampshire Republican Party. "As we all know, when he ran for office in Massachusetts being a Republican wasn't much of a priority for him. In fact, when he ran against Ted Kennedy, he said he didn't want to return to the days of Reagan-Bush. I always thought Ronald Reagan was a real Republican."

Related: Romney: I am 'Republican wing of the Republican Party'

"So you'll understand why I'm a little perplexed when Mitt Romney now suggests that he's a better Republican than me," McCain said, "or that he speaks for the Republican wing of the Republican Party."

Fred Thompson's campaign weighed in on Romney's comments as well.

"In 1994, Mitt Romney accomplished what people had long thought was impossible – he ran for Senate to the left of Ted Kennedy," said Todd Harris, Thompson's Communications Director in an e-mail statement Saturday. "I didn't know there was any room there. For him to now claim to represent the Republican wing of the Republican Party is yet another Mitt Romney flip flop."

“The status-quo mindset that has gripped Washington and molded those that have been there for so long is in need of fresh ideas and conservative change that can only come from outside of Washington," Madden said. "Angry attacks from flailing campaigns won’t stop Governor Romney from moving forward with his optimistic agenda designed to bring sorely needed change to Washington.”

McCain was scheduled to campaign in New Hampshire on Saturday and Sunday.

Democrats (and John Cox) push for black vote in Iowa

"I think of Rosa Parks who wasn't going anywhere that day on the bus," the New York senator said. "She was willing to stand up for every American tired of giving up his or her seat, and because she did that the rest of us can stand a little more proudly."

Sen. Biden, D-Delaware, who told the group he's spent a majority of his life working in the black community, said he wants to fix a justice system that can be unfair to African Americans.

"A significant number of young black babies born in this country who are male," Biden said, "get put on that superhighway from the cradle to prison...with the prejudice and disadvantage that exists."

Rounding off the evening was Sen. Obama, D-Illinois, who compared his work as a community organizer in Chicago to the work of the group that hosted the event, Sisters on Target.

"We helped lift up poor neighborhoods that had been devastated by the closure of steel plants and by racial turnover in the community," the Illinois senator said. "We built a movement that brought about change. This is what Sisters on Target is all about...You've built a strong grassroots movement here in Iowa."

And in the midst of the three Democrats was Cox, whose speech wasn't met with nearly the applause that followed the others'. In fact, he heard boos after he told the crowd the United States "ought to be able to do something better than Bushes and Clintons" in the White House.

"On foreign policy I think that she tends to think more conventionally, at a time when we're facing a series of unconventional threats," the Illinois senator said.

Speaking to reporters in Des Moines, Obama implied that Clinton may be more willing to "go along with Bush policies that could provide a rationale for keeping troops in Iraq longer or engaging in aggression towards Iran."

He also said the two differ in how aggressive they are in direct diplomacy and the kinds of messages they're sending to the world with respect Iraq, but he admitted that "there is overlap in terms of our positions on healthcare or some other issues."

When asked if he felt the campaign could be getting ugly, Obama responded by saying his campaign is not undergoing any fundamental transformation in their approach.

"We continue to offer a hopeful and optimistic message about where we want to take the country," Obama said. "Obviously there are going to be differences between the candidates...and the voters are going to need to know where those differences are."

"None of these differences I think rise to the level of personal attacks or gratuitous attacks, and that's the kind of politics I think people are tired of."