The Idaho Republican wants the Minnesota Court of Appeals to overturn a judge's decision refusing to let him withdraw a guilty plea to misdemeanor charges stemming from his arrest in June.

"From the outset Senator Craig has maintained that he is innocent of any illegal conduct at the Minneapolis airport," Craig's lawyer, Billy Martin, said in a written statement. "Like every other citizen, Senator Craig has the constitutional right to make every effort to clear his name." 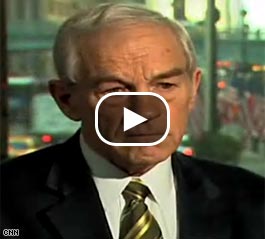 WASHINGTON (CNN) - Former New York City Mayor Rudy Giuliani often stresses his ability to protect America from terrorist threats, but what about from enemies beyond this planet?

Campaigning in Exeter, New Hampshire Sunday, the New York Republican was asked by a young questioner what he would do if aliens attacked the United States, according to the Associated Press.

"Of all the things that can happen in this world, we'll be prepared for that. Yes we will," Giuliani said, noting that he had never fielded a question about potential attacks from outer space before.

"We'll be prepared for anything that happens," he added.

Giuliani spent most of Sunday campaigning in the Granite State, the same day a new poll indicated he narrowly trails rival Mitt Romney there.

For African-Americans, 'another Clinton presidency'

(CNN) - Democratic presidential frontrunner Hillary Clinton drew a direct connection to her husband’s time in the White House in a television interview broadcast Sunday, saying, “I want African-Americans to feel that, when I’m president, it’s another Clinton presidency.”

Her comments came in a taped interview with TV One’s “One on One” program.

The show was broadcast over a weekend in which Clinton won two potentially major endorsements in the battle for the southern African-American vote. Rep. John Lewis, D-Georgia, chose to officially back her instead of Sen. Barack Obama on Friday, and she was endorsed by the Alabama Democratic Conference on Saturday

Congressman Lewis was one of the most prominent leaders of the civil rights movement starting in the 1960s.

During the interview, Clinton said that the African-American vote “is pivotal because of numbers and because of value. I personally feel African-Americans have to be much more involved, and I think it is great that we have a campaign this year with me running [and] with Barack running…. [H]opefully we'll get even more African-Americans to register to vote, to show up to vote, and [to] take part in the debate.”

The Democratic frontrunner went on to say, “I want African Americans to feel that, when I’m president, it’s another Clinton presidency. [W]e’re going to be doing everything we can to get this country to be on the side of…people who are working hard and struggling so that they can have a better chance.”

WASHINGTON (CNN) – In the wake of the Service Employees International Union’s decision not to unite behind one candidate on a nationwide level, two Democratic presidential hopefuls began picking up endorsements from the major labor union's state branches on Monday.

Former North Carolina Sen. John Edwards announced the Iowa branch’s support, while Sen. Barack Obama, D-Illinois, has won the official backing of the SEIU in both his home state and Indiana.

Once a state branch officially backs a presidential contender, its members can only campaign for that candidate within their own state and in others that choose the same candidate.

A national SEIU nod would have been a huge boost for Edwards, who has fought especially hard for union support. His campaign manager, David Bonior, called the Iowa branch’s endorsement a "big, big victory" for the campaign.

"Make no mistake about it. Everybody tried very hard to get this endorsement, and we will have by far the most," Bonior said. "The other two major candidates in this race will not come close to us in competing and getting the endorsements of members of the Service Employees International Union."

Edwards' campaign said more endorsements will be announced as early as this afternoon.

Secretary of State Bill Gardner, left, listens as Robert Haines speaks before filing as a candidate in New Hampshire Monday.

New Hampshire's WMUR-TV reports that on the first day candidates could officially file for the Granite State's presidential primary, some threw their hats - and much more - into the ring.

The first candidate to show in person at the secretary of state's office Monday morning was Robert Haines, WMUR reports, who put on a one-man show. Haines had several costume changes and played various characters before submitting his paperwork and announcing his platform.

Is Bush a 'windshield cowboy'? 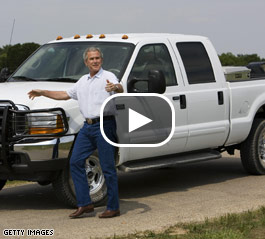 Former Massachusetts Gov. Mitt Romney has spent the most on TV advertising so far among presidential contenders.

WASHINGTON (CNN) - A wide-open presidential race and a willingness by candidates, interest groups, unions and corporations to buy TV time will lead to historic spending for political and issue-advocacy advertising in the 2008 election cycle, an analysis shows.

The cost to try to influence the 2008 election could exceed $3 billion, according to TNS Media Intelligence/Campaign Media Analysis Group, CNN's consultant on political television advertising.

Craig: Romney 'threw me under the campaign bus'

Craig is not happy with how the Romney campaign treated him.

WASHINGTON (CNN) - Sen. Larry Craig, the Idaho Republican caught in a Minneapolis bathroom sex sting this summer, said presidential candidate Mitt Romney "threw me under the campaign bus" when news of his arrest came out.

"He not only threw me under his campaign bus, he backed up and ran over me again," Craig told NBC's Matt Lauer in an interview set to air later this week on the "Today" show.

Romney, the former governor of Massachusetts, said Craig's behavior was "disgraceful" and called for Craig's resignation when news of the senator’s arrest came out at the end of August. (Ticker: Romney: Craig has to look at his conscience)

Craig was Romney's Senate liaison before resigning from the campaign.

Romney spokesman Kevin Madden defended the presidential candidate's response. "Governor Romney simply believes that a public office is a public trust," Madden said. "He believes when a public official enters a guilty plea, they have broken that public trust and should step aside for the sake of their constituents."

Romney and Clinton on top in New Hampshire

Romney, above, and Clinton lead in the Granite State, according to a new poll.

Clinton holds a double digit lead over her closest rival, Illinois Sen. Barack Obama, in the battle for the Democratic nomination. Romney is separated by four percentage points from former New York City Mayor Rudy Giuliani, in the contest for the Republican nomination.

New Hampshire has not yet set a date for its primary, but Secretary of State William Gardner has indicated it will be held no later than January 8. The filing period for the New Hampshire primary begins Monday at 8 a.m. ET, and closes on November 2 at 5 p.m. ET. The filing fee is $1,000.