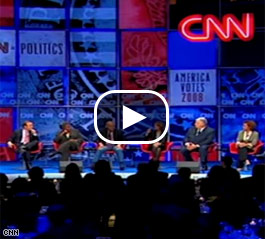 At CNN's America Votes 2008 Breakfast, the chief architect of Bill Clinton's successful 1992 presidential run predicted that former Florida Gov. Jeb Bush will be the Republican nominee in 2008. Jeb is a younger brother of President Bush.

Carville bolstered his prediction, highlighting Jeb Bush's career: He was a successful governor of a large state, he enjoys the support of social conservatives, he speaks Spanish, and "he's somebody the party could rally around," Carville said.

"There is nobody in this field who can rally the Republican Party; he's the only person in America that can do it," he added.

But fellow CNN analyst and former Oklahoma GOP Congressman J.C. Watts disagreed with Carville, saying, "The conventional wisdom caucus, the establishment of the Party, pardon my English, but they ain't going to allow that to happen."

There has been high speculation that Jeb Bush might make a run at the White House in 2008, but then, late last year, he said he would not run.

Former President George H.W. Bush suggested to CNN's Larry King last April that "Bush Fatigue" may be one of the reasons the former Florida governor is sitting out the 2008 race.

But the former president predicted his youngest son may enter politics again in the future.

"I hope that Jeb, who left office looking good, is not through with politics," the elder Bush said. " I think he's a good man, most other people think that, a man of principle. And I think he's got a future."