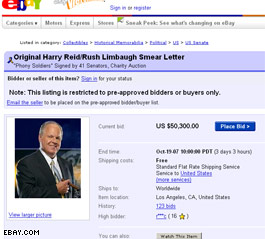 Reid's letter is a hot item on eBay.

WASHINGTON (CNN) - It may turn out to be the most valuable letter Senate Majority Leader Harry Reid ever sent.

Mays refused to condemn the remarks and Limbaugh recently placed Reid's letter on eBay, pledging to match whatever it fetched and donate it all to The Marine Corps – Law Enforcement Foundation.

As of Tuesday morning, the top bid for the letter was over $50,000. The bidding ends Friday.

"I'm going to match the dollar figure, and I have suggested that Sen. Reid and the 40 other Democrats who signed the smear letter … also match the donation," Limbaugh said on his show Monday.

Limbaugh's original remark came on a September 26 program as he and a caller were discussing critics of the Iraq war.

After the liberal media watchdog group MediaMatters.org and several Democrats quickly condemned the remark, Limbaugh said he was "taken out of context," and added he was referring to one soldier specifically - Jesse MacBeth, a war critic who falsely claimed to be an Iraq veteran.